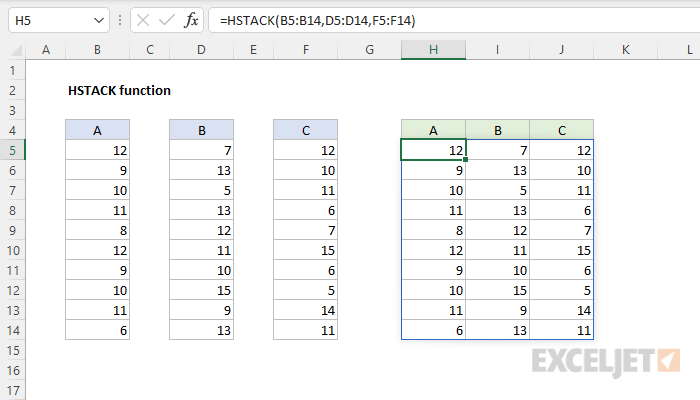 The Excel HSTACK function combines arrays horizontally into a single array. Each subsequent array is appended to the right of of the previous array.

The HSTACK function combines arrays horizontally into a single array. Each subsequent array is appended to the left of the previous array. The result from HSTACK is a single array that spills onto the worksheet into multiple cells.

HSTACK works equally well for ranges on a worksheet or in-memory arrays created by a formula. The output from HSTACK is fully dynamic. If data in any given array changes, the result from HSTACK will update immediately.

HSTACK stacks ranges or arrays horizontally. In the example below, the range B3:D3 is combined with the range B6:C6. Each subsequent range/array is appended to the right of the previous range/array. The formula in F3 is:

Ranges may include multiple rows, as seen below. The formula in F3 is:

HSTACK can work interchangeably with both arrays and ranges. In the worksheet below, we combine the array constant {"Red";"Blue";"Green"} with the range B2:B4. The formula in F3 is:

By default, the cells used for padding will display the #N/A error. One option for trapping these errors is to use the IFERROR function. The formula in I5 is:

Sum by week
In this example, the goal is to sum the amounts in column C by week, using the dates in the range E5:E10 which are all Mondays. All data is in an Excel Table named data in the range B5:C16. This problem can be solved in...

Dynamic two-way count
In this example, the goal is to create a formula that performs a dynamic two-way count of all color and size combinations in the range B5:D16. The solution shown requires four general steps: Create an Excel Table...

10 most common text values
In this example, the goal is to list the 10 most frequently occurring text values in a range, in descending order by count, as seen in the range in E5:F14. This is an advanced formula that requires a number of nested...

Just a really quick note to say thanks for the "normalize size units to gigabytes" formula -- it's one of the very few times in my 25+ year career that I've found a help page on the net where the suggested solution worked perfectly, unmodified. -Ian