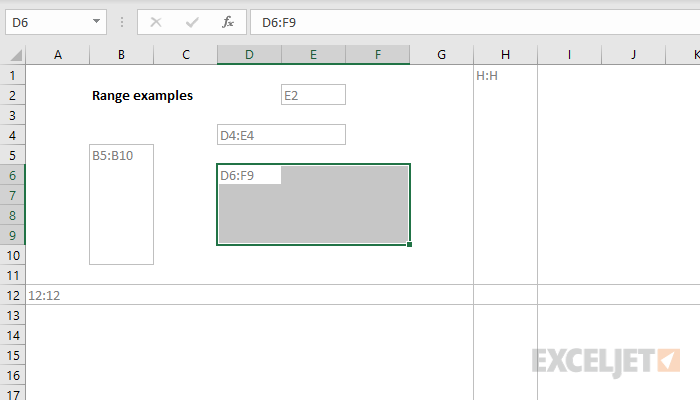 The concept of a cell range is one of most important ideas in Excel. A range is a rectangular group of cells. For example, you can refer to the first 10 cell in column A with a range like this:

In Excel, the colon (:) is a range operator, and separates the first reference from the last reference in a range. If a range includes just one cell, there is no need to use a colon (:) and a second reference. For example, both references below are the same:

Ranges can include full columns or rows. To refer to all of column A, you can write:

Like cell references, ranges can be relative, absolute, or mixed:

Ranges are commonly used in all kinds of formulas. Ranges also map perfectly to arrays, a programming concept used in more advanced formulas.

Ranges can be named using the name box. Named ranges are an easy way to make a formula easy to read and understand. Named ranges also behave like absolute references by default, so they are a handy way to lock certain ranges in a formula that needs to be copied.

Just wanted to say thank you - I have wasted so much time doing manual time calculations in Excel and then found your website and now its all done with formulas automatically. So clear and easy to understand!
Nick
END_OF_DOCUMENT_TOKEN_TO_BE_REPLACED