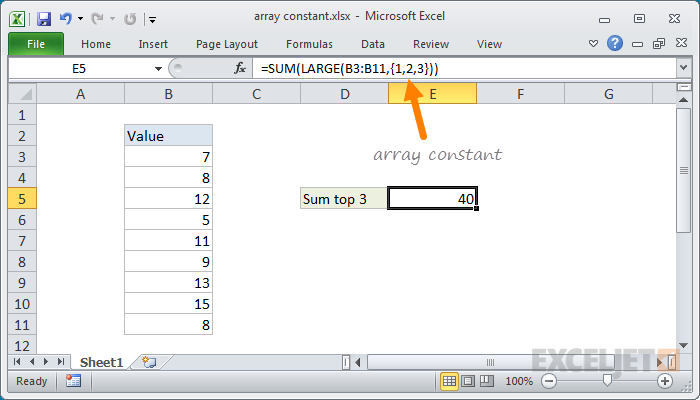 An array constant is a hard-coded set of values provided in an Excel formula. Array constants appear in curly braces {} like this:

Array constants are often used in array formulas to create or manipulate several values at once, rather than a single value. For example, the LARGE function can be used with an array constant like this to get the top 3 values in B3:B11:

In many cases, formulas that use array constants do not require Ctrl+Shift+Enter, even though they are in fact array formulas.

When you provide an array constant to an Excel function as an argument, you will often receive more than one result in an array. You'll want deal with these arrays using another function that handles arrays natively. In the example shown, the LARGE function returns 3 values, which are "caught" by the SUM function, which returns the sum as a final result:

The formula in the screenshot is explained here.

Another example of array constants inside the COUNTIFs function.

It's a really well thought out product. I'm a senior IT consultant and I do a lot of work with spreadsheets but not so much that I can remember all of the tricks. The way you guys slice it up and get to the point quickly is very helpful. I really only use about 5-10% of the material but it is super helpful.
Tom
END_OF_DOCUMENT_TOKEN_TO_BE_REPLACED