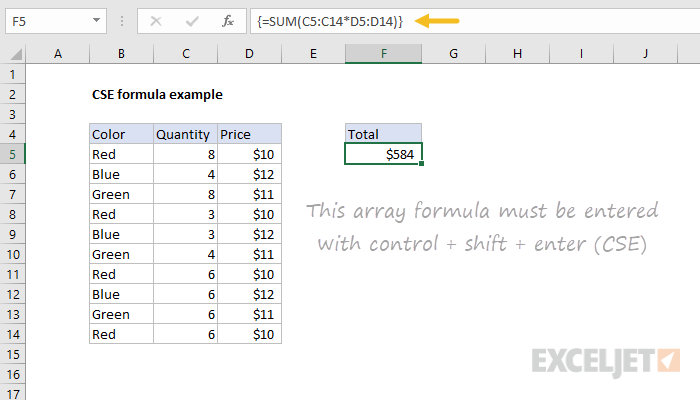 The acronym "CSE" stands for "Control + Shift + Enter". A CSE formula in Excel is an array formula that must be entered with control + shift + enter. When a formula is entered with CSE, Excel automatically wraps the formula in curly braces {}.

This array formula provides "total sales" in one cell, without a separate column and formula to multiply quantity times price. The curly braces are a clear indication that the formula was entered with CSE. If the same formula is entered without CSE, the result is incorrect.

Not all array formulas require CSE

Not all array formulas need to be entered with CSE. Entering a formula with CSE explicitly disables a behavior in Excel called "implicit intersection", but some functions do this natively. For example, in the example shown, the SUMPRODUCT function can be be used instead of SUM without CSE:

The SUMPRODUCT formula returns the same result, but does not require CSE.

Array formula
An array formula performs an operation on multiple values instead of a single value. The final result of an array formula can be either one item or an array of items, depending on how the formula is constructed. To work correctly, many array...

Array
An array in Excel is a structure that holds a collection of values. Arrays can be mapped perfectly to ranges in a spreadsheet, which is why they are so important in Excel. All Excel formulas that use a worksheet reference are working with arrays,...