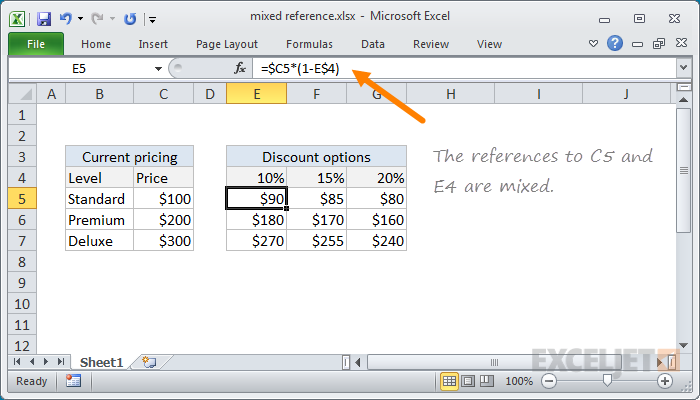 An mixed reference in Excel is a reference where part of the reference is absolute and part is relative. For example, the following references have both relative and absolute components:

Mixed references can be used to set up formulas that can be copied across rows or columns without the need for manual editing.  In some cases (3rd example above) they can be used to create a reference that will expand when copied.

Mixed references are a common feature in well-designed worksheets. They are harder to set up, but they make formulas much easier to enter. In addition, they significantly reduce errors since they allow the same formula to be copied to many cells without manual edits.

In the example shown the formula in E5 is:

Toggle between absolute and relative addresses

When entering formulas, you can use a keyboard shortcut to toggle through relative and absolute reference options, without typing dollar signs ($) manually.

Mixed reference
An mixed reference in Excel is a reference where part of the reference is absolute and part is relative. For example, the following references have both relative and absolute components: = $A1 // column locked = A$1 // row locked = $A$1:A2 // first...

23 Excel formula tips
In this video, we take a speed run through  23 tips you can use to save time with Excel formulas today. We try hard to make our videos quick and to the point, so this is a rapid-fire list, with more than 20 tips in about 10 minutes. We trust that you can rewind the video as needed :)

Thank you very much for the information. It worked fantastically! I have been trying to figure this out for more than a year, you had the answer for me very quickly. -Paul