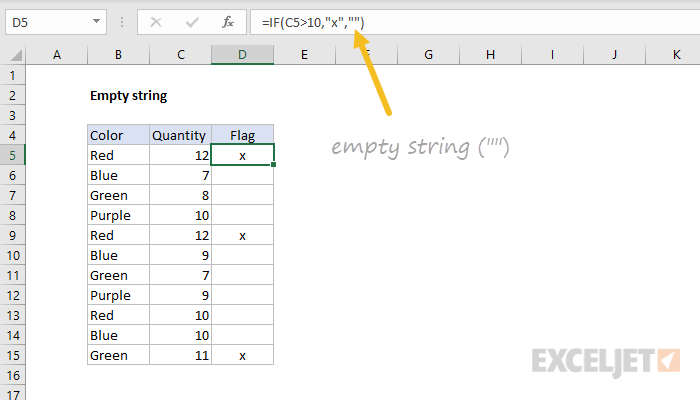 For example, in the screenshot shown, the formula D5, copied down, is:

Here, we use the IF function to check the value in column C5. If the value is greater than 10, the formula returns "x" as text. Otherwise, IF returns an empty string ("").

When an empty string is the result of a formula, it looks like the cell is blank. So, empty strings are commonly used to return a value that looks like nothing. In other words, return a result that appears as an empty cell.

One thing to note is that some functions will treat empty strings as if they do have a value. For example, the ISBLANK function will return FALSE if used on a cell that contains a formula that has returned "". Likewise, the COUNTA function will include cells that contain formulas that have returned "".

Text value
A text value (also called a "text string") is one of Excel's primary content types. Other types of content include numbers, dates, times, and Boolean values. As data is entered into a worksheet, Excel makes a "best guess" on the type of content it...

Concatenation
Concatenation refers to the operation of joining values together to create a text string. In Excel, you can concatenate with the concatenation operator, which is an ampersand (...

Text to columns
Text to Columns is a feature in Excel that parses the text in one cell/column into many columns using a delimiter than can be adjusted. You can find the Text to Columns button on the Data tab of the ribbon, in the Data Tools group. In the example...
Related videos