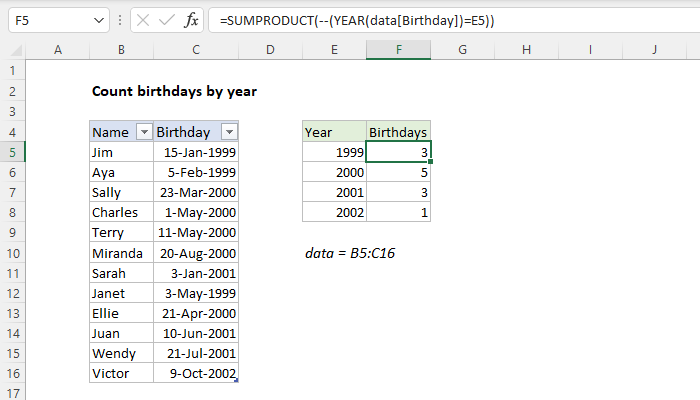 To count the number of birthdays by year, you can use a formula based on the SUMPRODUCT and YEAR functions. In the example shown, E5 contains this formula:

where data is an Excel Table in the range (C5:B16). As the formula is copied down, it returns a count of birthdays per year as shown. Video: What is an Excel table.

Note: this example has been updated below to show how to create an all-in-one formula with dynamic arrays in the latest version of Excel.

In this example, the goal is to count birthdays by year. The source data is an Excel Table named data in the range C5:C16. The birthdays we want to count are in the Birthday column. In column E, the years of interest have been previously entered. The easiest way to solve this problem is with the SUMPRODUCT function, but it can also be solved with COUNTIFS as explained below.

The easiest way to solve this problem is to use the SUMPRODUCT function together with the YEAR function like this in cell F5:

Working from the inside out, we use the YEAR function to extract the year from each birthday:

Because there are 12 dates in the list, the YEAR function returns 12 values in an array like this:

Next, each value in this array is compared against the year in E5, which is 1999. The result is a new array containing only TRUE and FALSE values:

In this array, TRUE represents birth years equal to 1999 and FALSE represents birth years not equal to 1999. We want to count the TRUE values, but because SUMPRODUCT will ignore the logical values TRUE and FALSE, we need to convert these values to 1s and 0s first. To perform this conversion, we use a double negative (--). The result is an array that contains just 1s and 0s, which is returned directly to the SUMPRODUCT function like this:

With only one array to process, SUMPRODUCT sums the array and returns a result of 3 in cell F5. As the formula is copied down, it returns a count of birthdays per year as seen in the worksheet.

Note: The SUMPRODUCT formula above is an example of using Boolean logic in an array operation. This is a powerful and flexible approach to solving many problems in Excel. It is also an important skill with new functions like FILTER and XLOOKUP, which often use this technique to apply multiple criteria (FILTER example, XLOOKUP example)

The COUNTIFS function can also be used to solve this problem but the formula is more complicated, because COUNTIF only works with ranges, and you can't extract the years to use as the range argument inside COUNTIFS. Instead, you must create a start and end date for each year. The formula looks like this:

As the formula is copied down column F, it returns a count of birthdays per year, same as the SUMPRODUCT formula.

In the latest version of Excel, which supports dynamic array formulas, it is possible to create a single all-in-one formula that builds the entire summary table, including headers, like this:

The LET function is used to assign three intermediate variables: years, uyears, and counts. The value for years is created like this:

Here, the YEAR function is used to extract just the year from all dates in data[Birthday]. Because the table contains 12 rows, the result is an array with 12 year values like this:

Next, the value for uyears (unique years) is created like this:

This array is returned to the SORT function, which returns an array sorted in ascending order:

In this example, it happens that the unique years are already in ascending order, so the SORT function does not change the result from UNIQUE. However, using the SORT function ensures that year values will always appear in order when source data is not sorted.

Next, the BYROW function is used to create a value for counts for each year like this:

BYROW runs through the uyears values row by row. At each row, it applies this calculation:

The value for r is the year in the "current" row. Inside the SUM function, this value is compared to years. Since years contains all 12 years, the result is an array with 12 TRUE and FALSE results. The TRUE and FALSE values are converted to 1s and 0s with the double negative (--), and the SUM function simply adds up the result, which is the count of birthdays associated with the current row. Since there are 4 unique years, the result from BYROW is an array with 4 counts like this:

Finally the HSTACK and VSTACK functions are used to assemble a complete table:

At the top of the table, the array constant {"Year","Count"} creates a header row. The HSTACK function combines uyears and counts horizontally, and VSTACK combines the header row and the data to make the final table. The result spills into multiple cells on the worksheet: 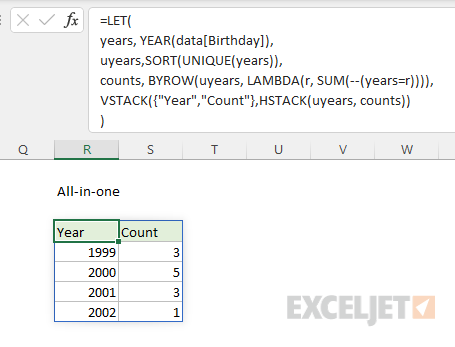 A Pivot Table is a good solution for this problem as well. This example shows how to count birthdays by month with a Pivot Table.

Count birthdays by month
You would think you could use the COUNTIF function to count birthdays, but the trouble is COUNTIF only works with ranges , and won't let you use something like MONTH to extract just the month number from dates. So, we use the SUMPRODUCT function...

Count dates by day of week
You might wonder why we aren't using COUNTIF or COUNTIFs ? These functions seem like the obvious solution. However, without adding a helper column that contains a weekday value, there is no way to create a criteria for COUNTIF to count weekdays in a...

Month number from name
In this example, the goal is to return a number, 1-12, for any month name of the year. For example, given the string "January" we want to return 1, "February" should return 2, and so on. If we had a valid Excel date , we could use a number format...

Get age from birthday
The DATEDIF function (Date + Dif) is a bit of an anomaly in Excel. A compatibility function that comes originally from Lotus 1-2-3, Excel will not help supply arguments when the function is entered. However, DATEDIF works in all modern versions of...

List upcoming birthdays
In this example, the goal is to list the next n upcoming birthdays from a larger set of 25 birthdays based on the current date. The set of birthdays are in an Excel Table named data in the range B5:C29. In the example shown, we are using 7 for n ,...

Dynamic summary count
In this example, the goal is to build a simple summary count table with a formula. Once created, the summary table should automatically update to show new values and counts when data changes. The article below walks through several options, from...
Related functions

The Excel YEAR function returns the year component of a date as a 4-digit number. You can use the YEAR function to extract a year number from a date into a cell or to extract and feed a year value into another formula, like the...

Excel UNIQUE Function
The Excel UNIQUE function returns a list of unique values in a list or range. Values can be text, numbers, dates, times, etc.

The Excel SORT function sorts the contents of a range or array in ascending or descending order. Values can be sorted by one or more columns. SORT returns a dynamic array of results.

I frequently use the resources you provide here on your website, and wanted to thank you for the awesome work you are doing. It is very well done, has great breadth, and lays out complex topics in an understandable way. -Chase