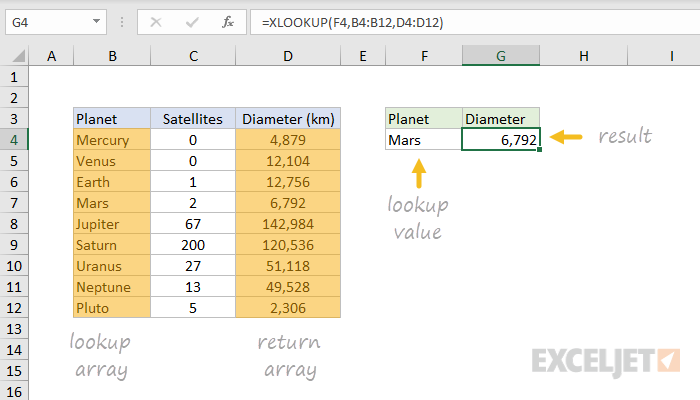 The Excel XLOOKUP function is a modern and flexible replacement for older functions like VLOOKUP, HLOOKUP, and LOOKUP.  XLOOKUP supports approximate and exact matching, wildcards (* ?) for partial matches, and lookups in vertical or horizontal ranges.

XLOOKUP is a modern replacement for the VLOOKUP function. It is a flexible and versatile function that can be used in a wide variety of situations.

XLOOKUP can find values in vertical or horizontal ranges, can perform approximate and exact matches, and supports wildcards (* ?) for partial matches. In addition, XLOOKUP can search data starting from the first value or the last value (see match type and search mode details below).  Compared to older functions like VLOOKUP, HLOOKUP, and LOOKUP, XLOOKUP offers several key advantages.

When XLOOKUP can't find a match, it returns the #N/A error, like other match functions in Excel. Unlike the other match functions, XLOOKUP supports an optional argument called not_found that can be used to override the #N/A error when it would otherwise appear. Typical values for not_found might be "Not found", "No match", "No result", etc. When providing a value for not_found, enclose the text in double quotes ("").

Note: Be careful if you supply an empty string ("") for not_found. If no match is found, XLOOKUP will display nothing instead of #N/A. If you want to see the #N/A error when a match isn't found, omit the argument entirely.

By default, XLOOKUP will perform an exact match. Match behavior is controlled by an optional argument called match_type, which has the following options:

By default, XLOOKUP will start matching from the first data value. Search behavior is controlled by an optional argument called search_mode, which provides the following options:

Binary searches are very fast, but data must be sorted as required. If data is not sorted properly, a binary search can return invalid results that look perfectly normal.

By default, XLOOKUP will perform an exact match. In the example below, XLOOKUP is used to retrieve Sales based on an exact match on Movie. The formula in H5 is:

XLOOKUP can return more than one value at the same time for the same match. The example below shows how XLOOKUP can be configured to return three matchging values with a single formula. The formula in C5 is: 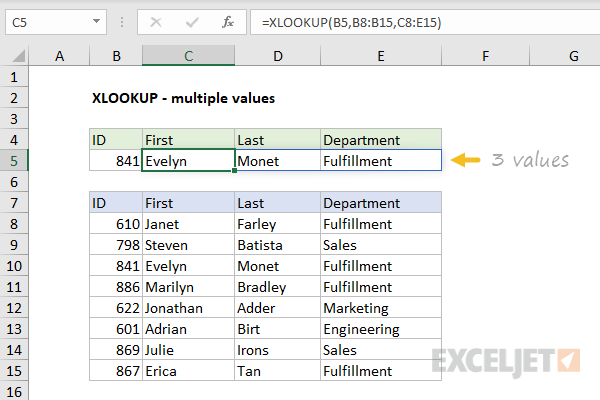 XLOOKUP can be used to perform a two-way lookup, by nesting one XLOOKUP inside another. In the example below, the "inner" XLOOKUP retrieves an entire row (all values for Glass), which is handed off to the "outer" XLOOKUP as the return array. The outer XLOOKUP finds the appropriate group (B) and returns the corresponding value (17.25) as the final result.

Like other lookup functions, if XLOOKUP does not find a value, it returns the #N/A error. To display a custom message instead of #N/A, provide a value for the optional "not_found" argument, enclosed in double quotes (""). For example, to display "Not found" when no matching movie is found, based on the worksheet below, use:

You can customize this message as you like: "No match", "Movie not found", etc.

With the ability to handle arrays natively, XLOOKUP can be used with complex criteria. In the example below, XLOOKUP is matching the first record where: account begins with "x" and region is "east" and month is not April:

XLOOKUP is a new function available in Excel 365 only.

Detailed LET function example
In this example, we have a simple set of data in B5:D16 that includes ID, Name, and Points. The goal is to generate a custom message for any name in the list by entering a valid ID in cell G5. The message uses the name...

XLOOKUP match text contains
The XLOOKUP function contains built-in support for wildcards, but this feature must be enabled explicitly by setting match mode to the number 2. In the example shown, XLOOKUP is configured to match the value entered...

Case sensitive lookup
At the core, this is an INDEX and MATCH formula, with the EXACT function used inside MATCH to perform a case-sensitive match. Working from the inside-out, EXACT is configured to compare the value in E5 against names in...

XLOOKUP two-way exact match
One of XLOOKUP's features is the ability to lookup and return an entire row or column. This feature can be used to nest one XLOOKUP inside another to perform a two-way lookup. The inner XLOOKUP returns a result to the...

XLOOKUP basic approximate match
In the example shown, the table in B4:C13 contains quantity-based discounts. As the quantity increases, the discount also increases. The table in E4:F10 shows the discount returned by XLOOKUP for several random...

XLOOKUP with logical criteria
XLOOKUP can handle arrays natively, which makes it a very useful function when constructing criteria based on multiple logical expressions. In the example shown, we are looking for the order number of the first order...

XLOOKUP with boolean OR logic
The lookup value is provided as 1, for reasons that become clear below. For the lookup array, we use an expression based on boolean logic: (data[Color]="red")+(data[Color]="pink") In the world of...

XLOOKUP latest by date
XLOOKUP offers several features that make it exceptionally good for more complicated lookups. In this example, we want the latest price for an item by date. If data were sorted by date in ascending order, this would be...

Case-sensitive INDEX and MATCH
In this example, the goal is to perform a case-sensitive lookup on the first name in column B, based on a lookup value in cell F6. By default, Excel is not case-sensitive and this applies to standard lookup formulas...

XLOOKUP rearrange columns
This formula uses XLOOKUP twice, by nesting one XLOOKUP inside another. The first (inner) XLOOKUP is used to perform an exact match lookup on the value in G5: XLOOKUP(G5,E5:E15,B5:E15) The lookup_value comes from...

XLOOKUP last match
By default, XLOOKUP will return the first match in a data set. However, XLOOKUP offers an optional argument called search_mode to control the order in which data is searched. Setting search mode to -1 causes XLOOKUP to...

Due date by category
In this example, the goal is to create a due date based on category, where each category has a different number of days allocated to complete a given task, issue, project, etc. The amount of time available to resolve ...

XLOOKUP with boolean logic
In this video we'll look how to use the XLOOKUP function with Boolean logic to apply multiple criteria.

Basic XLOOKUP example
In this video, we’ll set up the XLOOKUP function with a basic example. Matching on City name, we'll retrieve Country and Population.

I have tried several other Excel training programs, and yours has been the best by far. -Pete