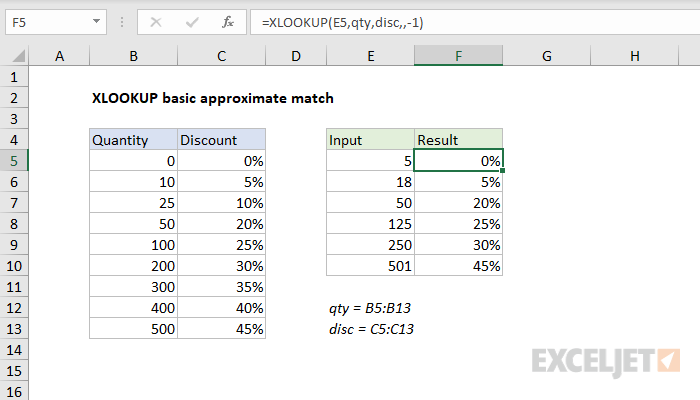 To use XLOOKUP to find an approximate match, supply the match_mode explicitly in the fourth argument. In the example shown, the formula in F5, copied down the table, is:

In the example shown, the table in B4:C13 contains quantity-based discounts. As the quantity increases, the discount also increases. The table in E4:F10 shows the discount returned by XLOOKUP for several random quantities. XLOOKUP is configured to use the quantity in column E to find the appropriate discount. The formula in F5, copied down, is:

The equivalent VLOOKUP formula for this example is either of the two formulas below:

There are several notable differences:

LOVE your emails and free seminars. Since I have joined the mailing list, I have attended everything so far. Please keep them coming!
Cody
END_OF_DOCUMENT_TOKEN_TO_BE_REPLACED