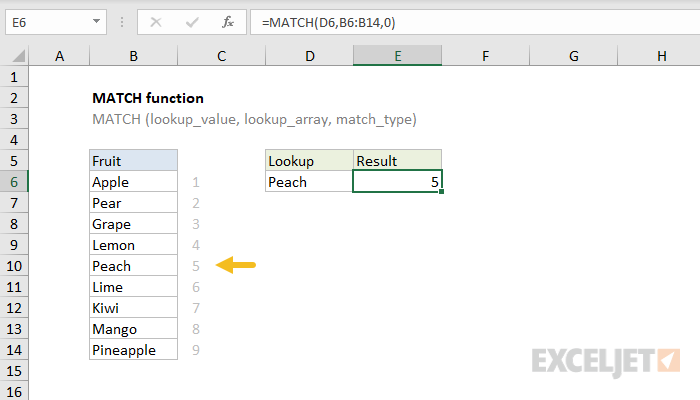 MATCH is an Excel function used to locate the position of a lookup value in a row, column, or table. MATCH supports approximate and exact matching, and wildcards (* ?) for partial matches. Often, MATCH is combined with the INDEX function to retrieve a value at a matched position.

Purpose
Get the position of an item in an array
Return value
A number representing a position in lookup_array.
Syntax
=MATCH (lookup_value, lookup_array, [match_type])
Arguments
Version
Excel 2003
Usage notes

The MATCH function can perform exact and approximate matches and supports wildcards (* ?) for partial matches. There are 3 separate match modes (set by the match_type argument), as described below.

MATCH only supports one-dimensional arrays or ranges, either vertical and horizontal. However, you can use MATCH to locate values in a two-dimensional range or table by giving MATCH the single column (or row) that contains the lookup value. You can even use MATCH twice in a single formula to find a matching row and column at the same time.

Frequently, the MATCH function is combined with the INDEX function in order to retrieve a value at a certain (matched) position. In other words, MATCH figures out the position, and INDEX returns the value at that position. For a detailed explanation, see How to use INDEX and MATCH.

Match type is optional. If not provided, match type defaults to 1 (exact or next smallest). When match type is 1 or -1, it is sometimes referred to as "approximate match". However, keep in mind that MATCH will find an exact match with all match types, as noted in the table below:

Caution: Be sure to set match type to zero (0) if you need an exact match. The default setting of 1 can cause MATCH to return results that "look normal" but are in fact incorrect. Explicitly providing a value for match_type, is a good reminder of what behavior is expected.

When match type is set to zero, MATCH performs an exact match. In the example below, the formula in E3 is:

Note: MATCH is not case-sensitive, so "Mars" and "mars" will both return 4.

When match type is set to 1, MATCH will perform an approximate match on values sorted A-Z, finding the largest value less than or equal to the lookup value. In the example shown below, the formula in E3 is:

When match type is set to zero (0), MATCH can perform a match using wildcards. In the example shown below, the formula in E3 is:

This is equivalent to:

The MATCH function is commonly used together with the INDEX function. The resulting formula is called "INDEX and MATCH".  For example, in the screen below, INDEX and MATCH are used to return the cost of a code entered in cell F4. The formula in F5 is:

In this example, MATCH is set up to perform an exact match. The MATCH function locates the code ABX-075 and returns its position (7) directly to the INDEX function as the row number. The INDEX function then returns the 7th value from the range C5:C12 as a final result. The formula is solved like this:

See below for more examples of the MATCH function. For more details on INDEX with MATCH, see:  How to use INDEX and MATCH.

Get first entry by month and year
Note: the values in E5:E7 are actual dates, formatted with the custom number format "mmyy". Working from the inside out, the expression: MATCH(TRUE,TEXT(date,"mmyy")=TEXT(E5,"mmyy") uses the...

Approximate match with multiple criteria
At the core, this is just an INDEX / MATCH formula. The problem in this case is that we need to "screen out" the extraneous entries in the table so we are left only with entries that correspond to the animal we are...

How to fix the #N/A error
About the #N/A error The #N/A error appears when something can't be found or identified. It is often a useful error, because it tells you something important is missing – a product not yet available, an employee name...

Match first does not begin with
The key to this formula is the array or TRUE and FALSE values constructed with this expression: LEFT(code,1)<>"N" Here, each value in the named range "code" is evaluated with the logical test "first...

Find and retrieve missing values
Working from the inside out, the core of this formula is the inner MATCH expression: ISNA(MATCH(complete,$D$5:D11,0) Here, the MATCH function is used to compare all "complete" values against the partial list. The...

Next largest match with the MATCH function
The default behavior of the MATCH function is to match the "next smallest" value in a list that's sorted in ascending order. Essentially, MATCH moves forward in the list until it encounters a value larger than the...

Link to multiple sheets
This formula relies on concatenation to assemble a valid location for the HYPERLINK function. In cell D5, the link location argument is created like this: "#"&B5&"!"&C5 // returns...

Filter contains one of many
The FILTER function can filter data using a logical expression provided as the "include" argument. In this example, this argument is created with an expression that uses the ISNUMBER and MATCH functions like this: =...

Match long text
The MATCH function has a limit of 255 characters for the lookup value. If you try to use longer text, MATCH will return a #VALUE error. To workaround this limit you can use boolean logic and the LEFT, MID, and EXACT...

Case sensitive lookup
At the core, this is an INDEX and MATCH formula, with the EXACT function used inside MATCH to perform a case-sensitive match. Working from the inside-out, EXACT is configured to compare the value in E5 against names...

Two-way approximate match multiple criteria
The goal is to lookup a feed rate based on material, hardness, and drill bit diameter. Feed rate values are in the named range data (D6:H16). This can be done with a two-way INDEX and MATCH formula. One MATCH function...

SUMIFS vs other lookup formulas
If you are new to the SUMIFS function, you can find a basic overview with many examples here. The SUMIFS function is designed to sum numeric values based on one or more criteria. In specific cases however, you may be...

Normalize size units to Gigabytes
Important: this formula assumes that units are the last 2 characters of the string that includes both a number and a unit of measure. This formula works because digital units have a "power of 10" relationship. At the...

FILTER with multiple OR criteria
In this example, criteria are entered in the range F5:H6. The logic of the formula is: item is (tshirt OR hoodie) AND color is (red OR blue) AND city is (denver OR seattle) The filtering logic of this formula (the...

Hyperlink to first match
Working from the inside out, we use a standard INDEX and MATCH function to locate the first match of lookup values in column B: INDEX(data,MATCH(B5,data,0)) The MATCH function gets the position of the value in B5...

Excel formula error codes
In this video, we'll walk through each of the error codes that Excel displays when there's something wrong with a formula. We'll also look at some simple ways to resolve the errors.

How to do a two-way lookup with INDEX and MATCH
In this video we'll use MATCH to find the position of an item in a table and the INDEX function to retrieve the value at that position in a two-way lookup.
Related functions

This site just saved my life today while importing data to a new database. THANK YOU!!! -Mary