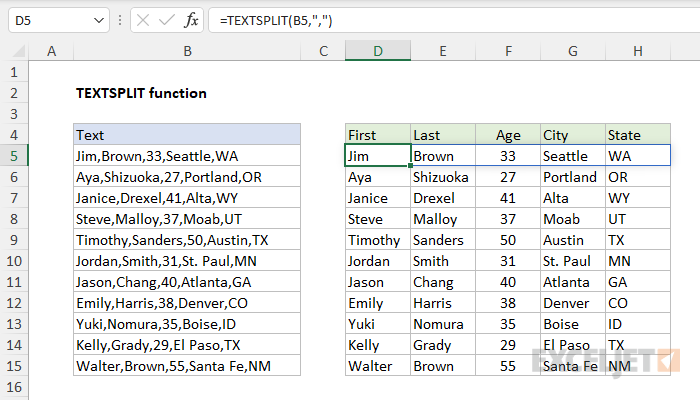 TEXTSPLIT takes a total of five arguments, only two of which are required. The first argument, text, is the text string to split. The second argument, col_delimiter is the delimiter to use for splitting text into separate columns. The third argument, row_delimiter, is the delimiter to use for splitting text into separate rows. Either col_delimiter or row_delimiter must be supplied along with text. The fourth argument, ignore_empty, controls TEXTSPLIT's behavior with empty values (i.e. when delimiters appear together with no value in between). By default, ignore_empty is FALSE, which means TEXTSPLIT will not ignore empty values. In practice, this means you will see an empty cell on the worksheet when there is an empty value in text. Set ignore_empty to TRUE to ignore empty values. The last argument is pad_with, which is a value that will appear when the output from TEXTSPLIT is a 2D array and a value is missing. See below for more information.

The result from TEXTSPLIT is an array that can be horizontal (columns) or vertical (rows). The worksheet below shows both options:

The first formula in cell D3 separates the three values into separate columns:

Notice a comma without space is used as the col_delimiter and enclosed in double quotes (","). The formula in cell D5 uses the same delimiter to split the text into separate rows:

In the second formula the delimiter (",") appears as the third argument, row_delimiter, and col_delimiter is not provided.

By default, TEXTSPLIT will not ignore empty values in the text, where empty values are defined as two or more consecutive delimiters without a value in between. This behavior is controlled by the ignore_empty argument, which defaults to FALSE, as you can see in the worksheet below:

The formula in cell D3 does not include a value for ignore_empty, which defaults to FALSE:

Notice empty values are not ignored. TEXTSPLIT includes an empty cell in the output where the empty value appeared in text. In the second formula, ignore_empty is set to TRUE, so the missing value between Red and Green is ignored completely:

In this case, TEXTSPLIT behaves as if the missing value does not exist at all.

Note: you can use 1 and 0 in place of TRUE and FALSE for the ignore_empty argument.

TEXTSPLIT can split text into rows and columns at the same time, as seen below:

The resulting array from TEXTSPLIT contains 3 rows and 2 columns.

The last argument in TEXTSPLIT is pad_with. This argument is optional and will default to #N/A. Padding is used when the output contains rows and columns and a value is missing that would affect the structure of the array. In the worksheet below, "Blue" does not contain a quantity (there is no "=" delimiter). As a result, TEXTSPLIT returns #N/A where the quantity would go, to maintain the integrity of the array.

The formula in cell E3 contains does not specify a pad_with argument so the default value is returned:

Multiple delimiters can be supplied to TEXTSPLIT as an array constant like {"x","y"} where x and y represent delimiters:

Notice also that there is an extra space separating green and purple. The TRIM function can be used to clean up extra space characters that appear in the output from TEXTSPLIT. The formula in F5 is:

Notice the extra space that appears before purple in cell I3 is gone in cell I5.

The Excel TEXTBEFORE function returns the text that occurs before a given substring or delimiter. In cases where multiple delimiters appear in the text, TEXTBEFORE can return text before the nth occurrence of the delimiter.

The Excel TEXTAFTER function returns the text that occurs after a given substring or delimiter. In cases where multiple delimiters appear in the text, TEXTAFTER can return text after the nth occurrence of a delimiter.

Very satisfied with the product! It has made me more efficient at work! -Evan