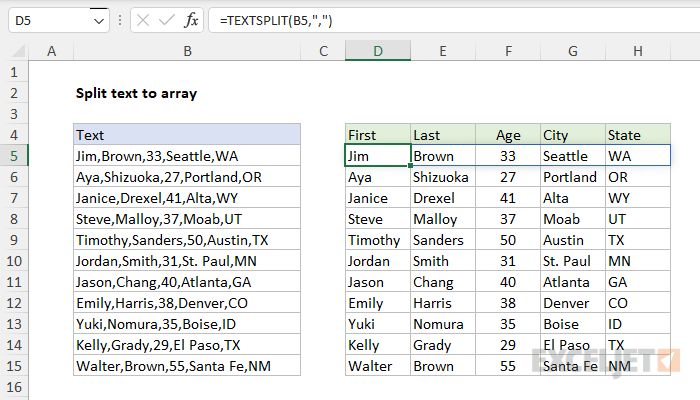 To split text with a delimiter into an array of values, you can use the TEXTSPLIT function. In the example shown, we are working with comma-separated values, so a comma (",") is the delimiter. The formula in cell D5, copied down, is:

TEXTSPLIT returns an array of separate values to cell D5, and the five values spill into the range D5:H5.

Note: in older versions of Excel without TEXTSPLIT, you can use a more complicated formula based on the FILTERXML function with help from the SUBSTITUTE and TRANSPOSE functions. Both approaches are explained below. If you don't want to use a formula, you can use Excel's Text-to-Columns feature.

In this example, the goal is to split the text strings in column B into an array of values. In a problem like this, we need to identify the delimiter, which is the character (or characters), that separate each value we want to extract. In this case, each text string in column B contains comma-separated values, so a comma (",") is the delimiter. For example, the comma-separated text in cell B5 looks like this:

There are three basic approaches to solving this problem:

This article explains the first two approaches in detail.

If you are using Excel 365, the easiest solution is to use the TEXTSPLIT function as shown in the worksheet above. TEXTSPLIT is a great way to solve this problem, because it is so simple to use. Although TEXTSPLIT can take up to six separate arguments, in this case, we only need to provide the first two arguments, text and col_delimiter. The formula in cell D5, copied down, is:

Notice we need to provide the comma as text surrounded by double quotes (","). With this configuration, TEXTSPLIT splits the text in cell B5 into five separate values and returns these values in a horizontal array:

This array is returned to cell D5, and the five values spill into the range D5:H5.

Older versions of Excel do not have a function dedicated to splitting text to an array, similar to the PHP explode function, or Python split method. As a workaround, you can use the FILTERXML function, after first adding XML markup to the text. The formula looks like this: 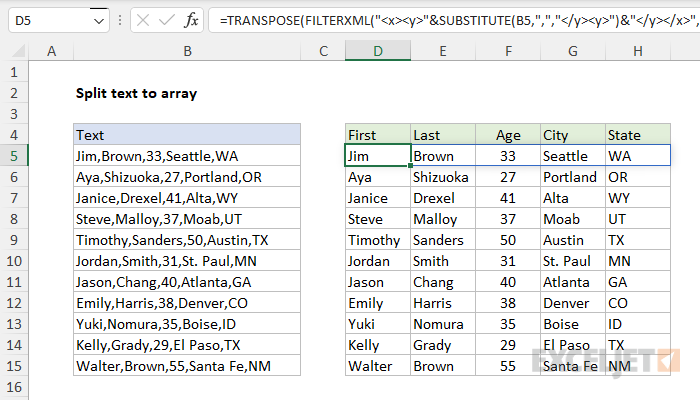 To use FILTERXML, we need XML, so the first task is to add XML markup to the text. We are going to arbitrarily make each field in the text a <y> element, enclosed with a parent <x> element. We start with the SUBSTITUTE function here:

The result from SUBSTITUTE is a text string like this:

To ensure well-formed XML tags and to wrap all <y> elements in a parent <x> element, we prepend and append more XML tags like this:

This text is delivered directly to the FILTERXML function as the xml argument, with an Xpath expression of "//y":

Xpath is a parsing language and "//y" selects all <y> elements. The result from FILTERXML is a vertical array like this:

Because we want a horizontal array in this instance, we wrap the TRANSPOSE function around FILTERXML:

In older versions of Excel, you can enter this formula as a multi-cell array formula in D5:H5. In Excel 365, the array will spill into the range D5:H5 automatically.

I learned the FILTERXML trick from Bill Jelen in a MrExcel video. FILTERXML is not available in Excel on the Mac, or in Excel Online. This is a nerdy workaround for difficult problems in older versions of Excel.The new TEXTSPLIT function in Excel 365 is a much easier way to solve this problem.

Notice we have simply nested the original formula inside the INDEX function. With FILTERXML, the formula looks like this:

If you don't want to use FILTERXML, or can't because you are using Excel on a Mac, this example shows another way to split text with a delimiter. This approach requires a bit more setup.

Formulas work great when you need a solution that is dynamic, because formulas will update automatically if data changes. However, if you only need a one-off manual process, you can also use Excel's Text-to-Columns feature.

I wanted to thank you for your site. I used it heavily when I started working at internships in college and I am now a PhD student who still finds her way back on the site for help. I really appreciate how straightforward and helpful your content is.
Melissa
END_OF_DOCUMENT_TOKEN_TO_BE_REPLACED