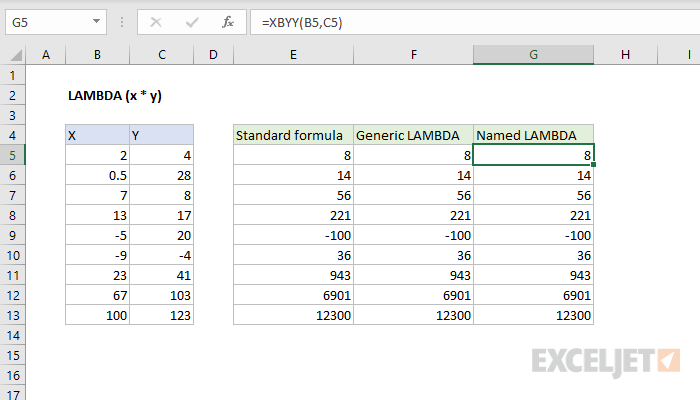 One of the key benefits of a custom LAMBDA function is that the logic contained in the formula exists in just one place. This means there is just one copy of code to update when fixing problems or updating functionality, and changes will automatically propagate to all instances of the LAMBDA function in a workbook.

The LET function is often used together with the LAMBDA function. LET provides a way to declare variables and assign values in a formula. This makes more complicated formulas easier to read by reducing redundant code. The LET function can also improve performance by reducing the number of calculations performed by a formula.

LAMBDA functions are typically created and debugged in the formula bar on a worksheet, then moved into the name manager to assign a name that can be used anywhere in a workbook.

There are four basic steps to creating and using a custom LAMBDA function:

The examples below discuss these steps in more detail.

To illustrate how LAMBDA works, let's begin with a very simple formula:

In Excel, this formula would use typically use cell references like this:

Next, we need to add the actual calculation, x*y:

If you enter the formula at this point, you'll get a #CALC! error. This happens because the formula has no input values to work with since there are no longer any cell references. To test the formula, we need to use a special syntax like this:

This syntax, where parameters are supplied at the end of a LAMBDA function in a separate set of parentheses, is unique to LAMBDA functions. This allows the formula to be tested directly on the worksheet before the LAMBDA is named. In the screen below, you can see that the generic LAMBDA function in F5 returns exactly the same result as the original formula in E5:

We are now ready to name the LAMBDA function with the Name Manager. First, copy the formula, not including the testing parameters at the end. Next, open the Name Manager with the shortcut Control + F3, and click New. 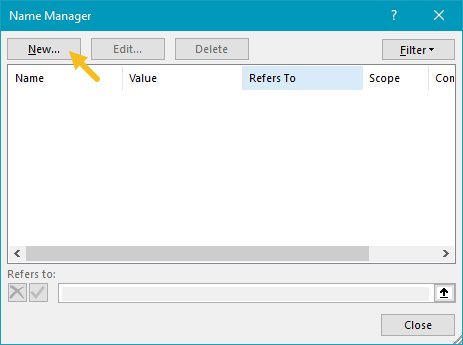 Make sure the formula begins with an equals sign (=). Now that the LAMBDA formula has a name, it can be used in the workbook like any other function. In the screen below the formula in G5, copied down, is:

The screen below shows how things look in the workbook:

The new custom function returns the same result as the other two formulas.

where A1 represents radius. The screen below shows this formula in action: 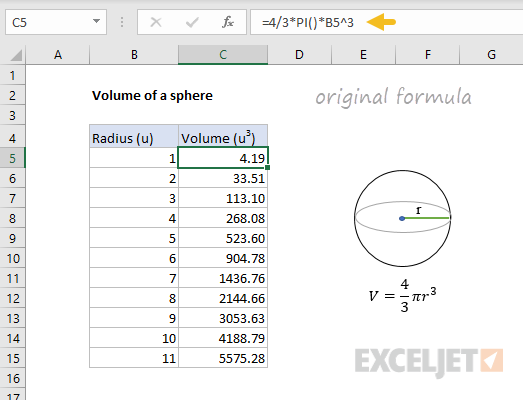 Notice this formula only requires one input (radius) to calculate volume, so our LAMBDA function will only need one parameter (r), which will appear as the first argument. Here is the formula converted to LAMBDA:

Back in the worksheet, we've replaced the original formula with the generic LAMBDA version. Notice we are using the testing syntax, which allows us to plug in B5 for radius: 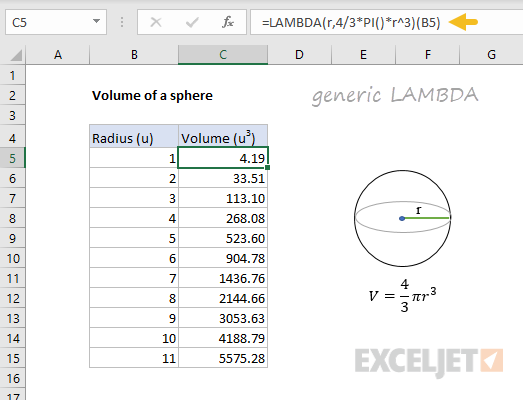 The results from the generic LAMBDA formula are exactly the same as the original formula, so the next step is to define and name this LAMBDA formula with the Name Manager, as explained above. The name used for a LAMBDA function can be any valid Excel name. In this case, we'll name the formula "SphereVolume".

Back in the worksheet, we've replaced the generic (unnamed) LAMBDA formula with the named LAMBDA version, and entered B5 for r. Notice the results returned by the custom SphereVolume function are exactly the same as previous results. 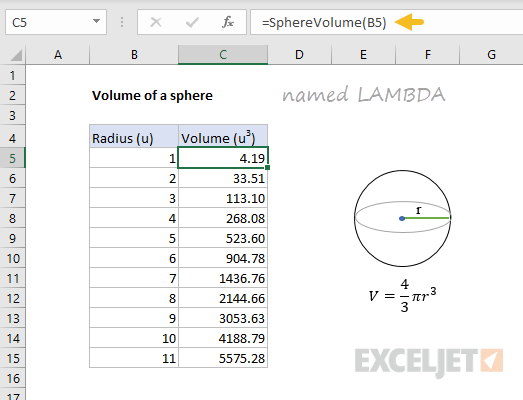 In this example, we'll create a LAMBDA function to count words. Excel doesn't have a function for this purpose, but you can count words with a cell with a custom formula based on the LEN and SUBSTITUTE functions like this:

Read the detailed explanation here. Here is the formula in action in a worksheet: 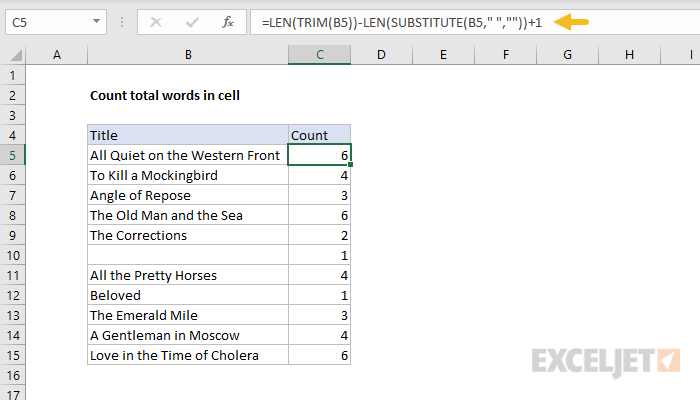 Notice we are getting an incorrect count of 1 when the formula is given an empty cell (B10). We'll address this problem below.

This formula only requires one input, which is the text that contains words. In our LAMBDA function, we'll name this argument "text". Here is the formula converted to LAMBDA:

Notice "text" appears as the first argument, and the calculation is the second and final argument. In the screen below, we've replaced the original formula with the generic LAMBDA version. Notice we are using the testing syntax, which allows us to plug in B5 for text: 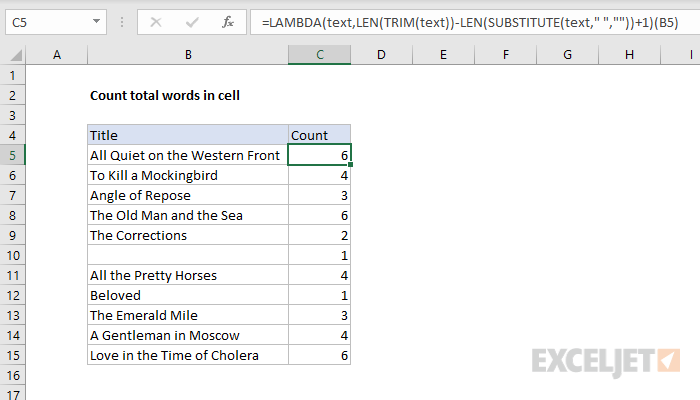 The results from the generic LAMBDA formula are the same as the original formula, so the next step is to define and name this LAMBDA formula with the Name Manager, as explained previously. We'll name this formula "CountWords".

Below, we've replaced the generic (unnamed) LAMBDA formula with the named LAMBDA version, and entered B5 for text. Notice we get exactly the same results. 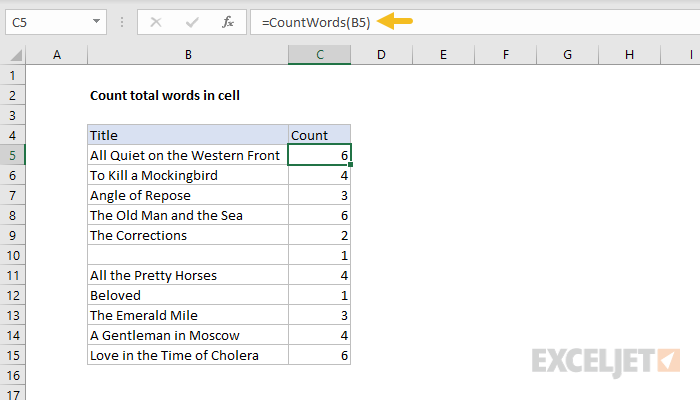 The formula used in the Name Manager to define CountWords is the same as above, without the testing syntax:

As mentioned above, the formula above returns an incorrect count of 1 when a cell is empty. This problem can be fixed by replacing +1 with the code below:

Full explanation here. To update the existing named LAMBDA formula, we again need to use the Name Manager:

Once the Name Manager is closed, the CountWords works correctly on empty cells, as seen below: 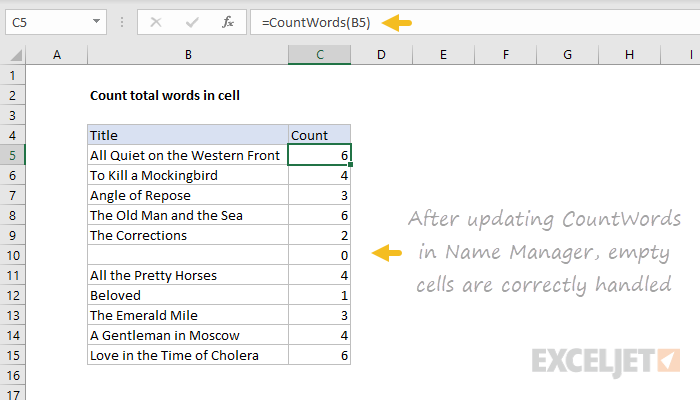 Note: by updating the code once in the Name Manager, all instances of the CountWords formula are updated at once. This is a key benefit of custom functions created with LAMBDA –formula updates can be managed in one place.

LAMBDA is a new function available in Excel 365 only.

Count columns that contain specific values
In this example, the goal is to count the number of columns in the data that contain 19 (the value in cell I4). The main challenge in this problem is that the value might appear in any row, and more than once in the...

Count unique dates ignore time
In this example, the goal is to count the unique dates in a range of timestamps (i.e. dates that contain dates and times). In addition, we also want to create the table of results seen in E7:F9. For convenience, data is...

LAMBDA contains which things
The goal in this example is to use a formula to report which things exist a cell. The list of things to check for is in the named range things (E5:E9). The result is returned as a comma separated text string. The first...

Get column totals
In this example, the goal is to return an array with 7 subtotals, one for each day of the week, as seen in columns C:I. The numbers to sum are contained in data which is the named range C5:I13. This is an example of a...

Sum numbers with text
In this example, one goal is to sum the numbers that appear in the range B5:B16. A second more challenging goal is to create the table of results seen in E7:F12. For convenience, data is the named range B5:B16. Total...

Dynamic summary count
In this example, the goal is to build a simple summary count table with a formula. Once created, the summary table should automatically update to show new values and counts when data changes. The article below walks...

LAMBDA split text to array
Excel does not provide a dedicated function to split a text string to an array, like PHP's explode(), or Python's split(). However, you can use the LAMBDA function to create a custom function that works in a similar way...

LAMBDA append range horizontal
Excel does not provide a formula function to append or combine ranges, either horizontally or vertically. You can use Power Query for this task, and this makes sense for data transformations that must be automated and...

Count rows that contain specific values
In this example, the goal is to count the number of rows in the data that contain the value in cell G4, which is 19. The main challenge in this problem is that the value might appear in any column, and might appear more...

LAMBDA count words
The LAMBDA function can be used to create reusable, custom functions in Excel without VBA or macros. The first step in creating a LAMBDA function is to verify the formula logic needed in a standard Excel formula. In...

The Excel MAP function "maps" a custom LAMBDA function to each value in a supplied array. The LAMBDA is applied to each value, and the result from MAP is an array of results with the same dimensions as the original...

The Excel REDUCE function applies a custom LAMBDA function to each element in a given array and accumulates results to a single value.

The Excel MAKEARRAY function returns a array with specified rows and columns, based on a custom LAMBDA calculation. MAKEARRAY can be used to create arrays with variable dimensions where values...

The Excel BYCOL function applies a LAMBDA function to each column in a given array and returns one result per column as a single array. In the example shown, data is the named range C5:H9....

I was recently struggling with some pivot table issues and found your website is truly the most thorough and clean excel learning source on the internet. Please keep up the good work :) -Lawrence