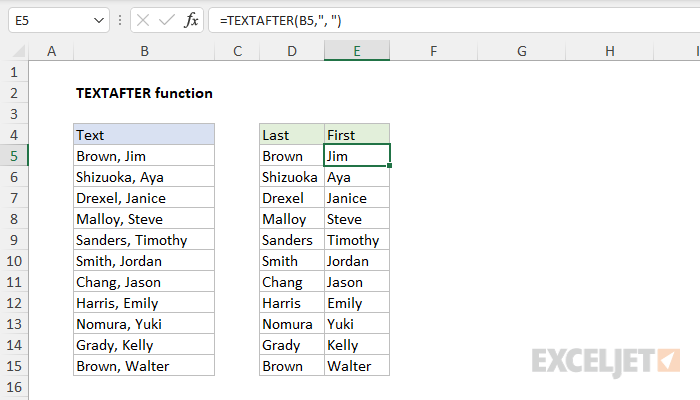 The Excel TEXTAFTER function returns the text that occurs after a given substring or delimiter. In cases where multiple delimiters appear in the text, TEXTAFTER can return text after the nth occurrence of a delimiter.

TEXTAFTER takes a total of four arguments, only two of which are required. The first argument, text, is the text string to extract from. The second argument, delimiter is the substring to use when extracting text. Both text and delimiter are required. The third argument, instance_num, is an integer that represents the nth instance of the delimiter in text (i.e. to extract the text after the second instance, use 2 for instance_num). By default, instance_num is 1. The last argument in TEXTAFTER is ignore_case, which is a boolean value that controls behavior when looking for a delimiter. Ignore_case defaults to FALSE, which means TEXTAFTER is case-sensitive by default.

You can use more than one character for delimiter. For example to extract the second dimension in the text string "12 ft x 20 ft", use " x "for delimiter:

Note we include a space before and after x, since all three characters function as a delimiter.

TEXTAFTER will return #N/A if the specified instance is not found.

TEXTAFTER supports negative values for instance_num, which makes it possible to return text after the last occurrence of delimiter like this:

If instance_num is out-of-range, TEXTAFTER returns an #N/A error.

To provide multiple delimiters at the same time to TEXTAFTER, you can use an array constant like {"x","y"} where x and y represent different delimiters. One use of this feature is to handle inconsistent delimiters in the source text. For example, in the worksheet below, the delimiter appears as a comma with a space (", ") and a comma without space (","). By providing the array constant {", ",","} for delimiter, both variations are handled correctly: 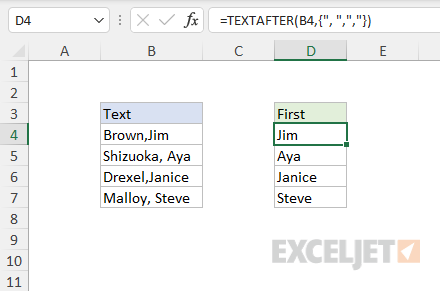 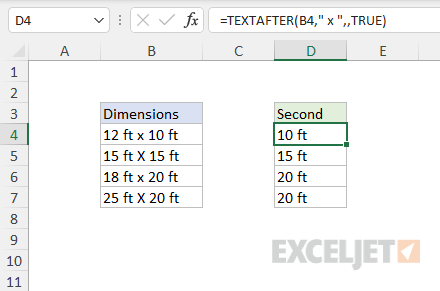 Note: you can use 1 and 0 in place of TRUE and FALSE for the ignore_case argument.

Sum numbers with text
In this example, one goal is to sum the numbers that appear in the range B5:B16. A second more challenging goal is to create the table of results seen in E7:F12. For convenience, data is the named range B5:B16. Total...
Related functions

The Excel TEXTBEFORE function returns the text that occurs before a given substring or delimiter. In cases where multiple delimiters appear in the text, TEXTBEFORE can return text before the nth occurrence of the delimiter.

Very satisfied with the product! It has made me more efficient at work! -Evan