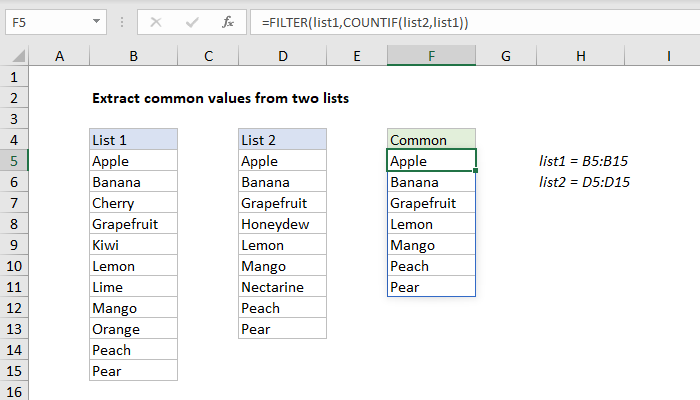 To compare two lists and extract common values, you can use a formula based on the FILTER and COUNTIF functions. In the example shown, the formula in F5 is:

The FILTER function accepts an array of values and an "include" argument which filters the array based on a logical expression or value.

In this case, the array is provided as the named range "list1", which contains all values in B5:B15. The include argument is delivered by the COUNTIF function, which is nested inside FILTER:

COUNTIF is set up with list2 as range, and list1 as criteria. Because we give COUNTIF eleven criteria values, COUNTIF returns eleven results in an array like this:

This array is delivered directly to the FILTER function as the "include" argument:

The FILTER function filters list1 using the values provided by COUNTIF. Values associated with zero are removed; other values are preserved.

The final result is an array of values that exist in both lists, which spills into the range F5:F11.

In the above formula, we use the raw results from COUNTIF as the filter. This works because Excel evaluates any non-zero value as TRUE, and zero as FALSE. If COUNTIF returns a count greater than 1, the filter will still work properly.

To force TRUE and FALSE results explicitly, you can use ">0" like this:

To remove duplicates, just nest the formula inside the UNIQUE function:

To sort results, nest in the SORT function:

Unique values
To extract a list of unique values from a set of data, you can use the UNIQUE function . In the example shown, the formula in D5 is: = UNIQUE ( B5:B16 ) which outputs the 7 unique values seen in D5:D11. How this formula works This example uses the...

Distinct values
To extract a list of distinct values from a set of data (i.e. values that appear just once), you can use the UNIQUE function . In the example shown, the formula in D5 is: = UNIQUE ( B5:B16 , FALSE , TRUE ) which outputs the 2 distinct values in the...

Unique values with criteria
To extract a list of unique values from a set of data, while applying one or more logical criteria, you can use the UNIQUE function together with the FILTER function . In the example shown, the formula in D5 is: = UNIQUE ( FILTER ( B5:B16 , C5:C16...

Unique values ignore blanks
To extract a list of unique values from a set of data, ignoring blank cells, you can use the UNIQUE function together with the FILTER function . In the example shown, the formula in D5 is: = UNIQUE ( FILTER ( B5:B16 , B5:B16 <> "...
Related functions

Excel UNIQUE Function
The Excel UNIQUE function returns a list of unique values in a list or range. Values can be text, numbers, dates, times, etc.

The Excel SORT function sorts the contents of a range or array. Values can be sorted by one or more columns. SORT returns a dynamic array of results.