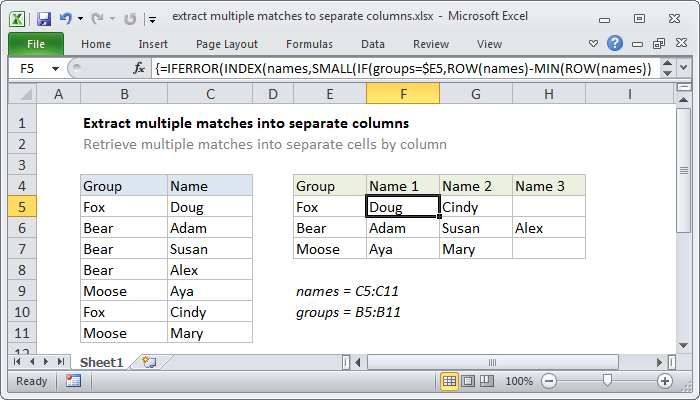 To extract multiple matches to separate cells, in separate columns, you can use an array formula based on INDEX and SMALL. In the example shown, the formula in F5 is:

This is an array formula and must be entered with Control + Shift + Enter.

After you enter the formula in the first cell, drag it down and across to fill in the other cells.

Note: this formula uses two named ranges: "names" refers to C5:C11, and "groups" refers to B5:B11. These names are defined in the screen shot above as well.

The gist of this formula is this: we are using the SMALL function to generate a row number corresponding to an "nth match". Once we have the row number, we simply pass it into the INDEX function function, which returns the value at that row.

The trick is that SMALL is working with an array that is dynamically constructed by IF in this bit:

This snippet tests the named range "groups" for the value in E5. If found, it returns a row number from an array of relative row numbers created with:

The final result is an array that contains numbers where there is a match, and FALSE where not:

This array goes into SMALL. The k value for SMALL (nth) comes from an expanding range:

When copied across the result table, the range expands, causing k (nth) to increment. The SMALL function returns each matching row number, which is supplied to the INDEX function as row_num, with the named range "names" as the array.

When COLUMNS returns a value for k that does not exist, SMALL throws a #NUM error. This happens after all matches have occurred. To suppress the error, we wrap the formula in the IFERROR function to catch errors and return an empty string ("").

Extract multiple matches into separate rows
Note: this formula uses two named ranges: "names" refers to C4:C11, and "groups" refers to B4:B11. These names are defined in the screen shot above as well. The gist of this formula is this: we are using the SMALL function to get a row number that...

Multiple matches in comma separated list
The core of this formula is the IF function, which "filters" the names in the table by color like this: IF ( group = E5 , name , "" )) The logical test checks each cell in the named range "group" for the color value in E5 (red in this case...
Related functions