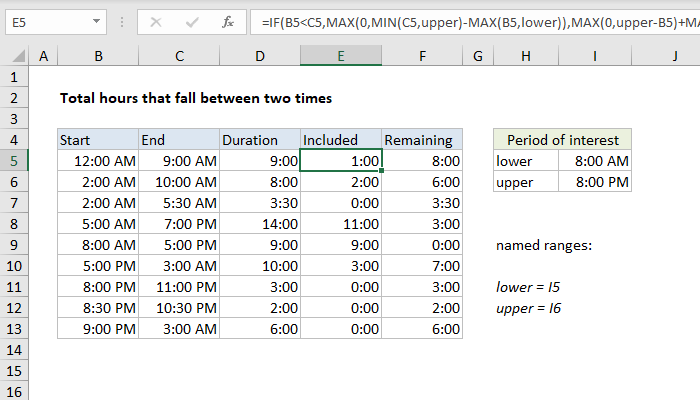 To calculate the total number of hours between a start and end time that overlap a period of interest with a given start and end time, you can use a formula based on the IF, MAX, and MIN functions. In the example shown, the formula in E5 is:

Thanks to Robert Johnson for his fix to the original formula, which broke in certain cases. Current version should work when upper > lower.

To calculate total hours between start and end time, the formula in D5 is:

This formula is explained in more detail here.

The formula in E5 works in two parts, using IF to control flow. If the start time is less than the end time, we calculate the overlap with:

If the start time is greater than end time (i.e. start time and end time cross midnight), we use:

By using MAX with zero, we prevent negative values from being used.

Finally, to figure out "Remaining" hours (i.e. hours that do not fall in the period of interest) we simply subtract E5 (included) from D5 (total duration).

Timesheet overtime calculation formula
To calculate overtime and pay associated with overtime, you can use the formulas explained on this page. In formula in cell I5 is: = ( F5 * H5 ) + ( G5 * H5 * 1.5 ) How this formula works Note: it's important to understand that Excel deals with time...

Basic timesheet formula with breaks
To calculate work hours, taking into account break time that needs to be subtracted, you can use a formula based on the MOD function. MOD is used to handle start and end times that cross midnight. In the example shown, the formula in F6 is: = MOD (...
Related functions

The Excel MIN function returns the smallest numeric value in a range of values. The MIN function ignores empty cells, the logical values TRUE and FALSE, and text values.

The Excel MAX function returns the largest numeric value in a range of values. The MAX function ignores empty cells, the logical values TRUE and FALSE, and text values.