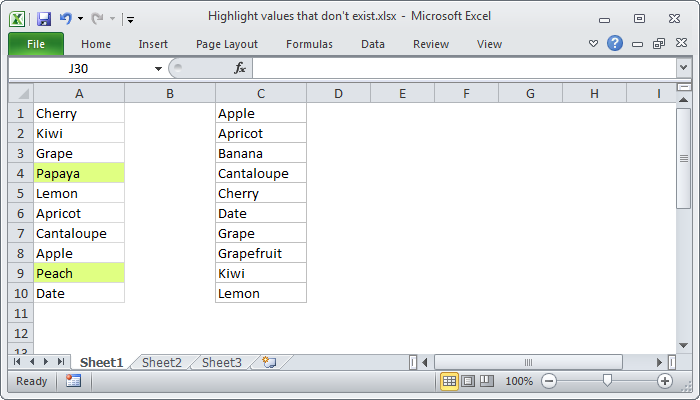 Note: with conditional formatting, it's important to enter the formula relative to the "active cell" in the selection, which is assumed to be A1 in this case.

This formula is evaluated for each of the 10 cells in A1:D10. A1 will change to the address of the cell being evaluated, while C1:C10 is entered as an absolute address, so it won't change at all.

But when a value is not found in C1:C10, the COUNTIF returns zero and, since 0 = 0, the formula will return TRUE and the conditional formatting will be applied.

If you name the list you are searching (C1:C10 in this case) with a named range, the formula is simpler to read and understand:

This works because named ranges are automatically absolute.

If you need a case sensitive count, you can use a formula like this:

The EXACT function performs a case-sensitive evaluation and SUMPRODUCT tallies the result. As with the COUNTIF, this formula will return when the result is zero. Because the test is case-sensitive, "apple" will show as missing even if "Apple" or "APPLE" appears in the second list. See this page for a more detailed explanation.

Value exists in a range
The COUNTIF function counts cells that meet supplied criteria, returning the number of occurrences found. If no cells meet criteria, COUNTIF returns zero. Any positive number means the value was found. This means you can use the greater than...

Find missing values
The COUNTIF function counts cells that meet criteria, returning the number of occurrences found. If no cells meet criteria, COUNTIF returns zero. You can use behavior directly inside an IF statement to mark values that have a zero count (i.e. values...
Related functions