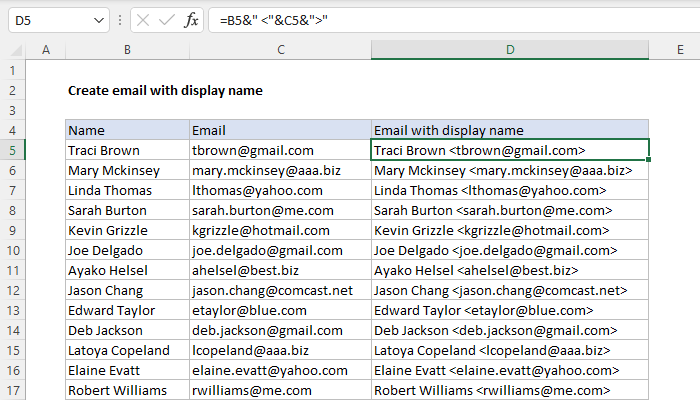 To create an email address with a display name, you can use concatenation. In the example shown, the formula in D5, copied down, is:

The result is a text string that contains both the name and email address enclosed in angle brackets (<>).

Some applications show an email addresses together with a "display name", where the name appears first, followed by the email address enclosed in angle brackets (<>). The goal in this example is to create a format like this based on an existing name and email address.

In the worksheet shown, column B contains a name, and column C contains an email address. The formula in column D uses the ampersand character (&) to join the name and email address together:

This is an example of concatenation. On the right side of the formula, the email address in C5 is wrapped in angle brackets:

Notice the angle brackets are text and must be enclosed on double quotes (""). Also notice that opening bracket (<) begins with a space character. This allows us to join the name directly to the left side:

The result is the name followed by a space character, followed by the email address in angle brackets.

Note that the CONCATENATE function is now technically replaced by the CONCAT function, which was first released in Excel 2019. The TEXTJOIN function is primarily designed to concatenate ranges.

Get domain from email address
At the core, this formula extracts characters from the right with the RIGHT function, using FIND and LEN to figure out how many characters to extract. C4 contains the text " achang@maaker.com ", so LEN returns 17 characters: LEN ( C4 ) // returns 17...
Related functions

The Excel CONCATENATE function concatenates (joins) join up to 30 values together and returns the result as text. In Excel 2019 and later, the CONCAT and...

How to change case with UPPER LOWER and PROPER
In this video we show how to use the UPPER, LOWER, and PROPER functions to transform case with a formula.
Related courses
Core Formula