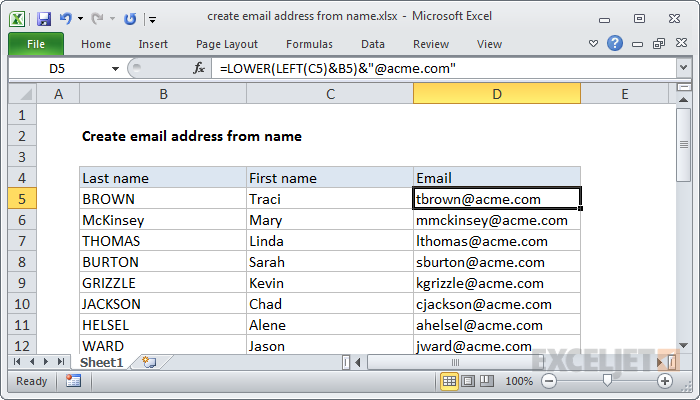 To build email addresses using first and last names, you can use a formula that concatenates values, with help from the LOWER and LEFT functions as needed.

The first letter of the first name is then joined to the last name using the concatenation operator (&), and the result is wrapped in the LOWER function, which forces all text to lower case.

Finally, result is jointed again to "@" and then to the domain. The domain is kept separate for convenience only. The formula could be written like this:

To simply the formula, you could create a named range "domain" to hold the domain name, then rewrite the formula like this:

Changing the value in the named range will then update all email addresses at once.

It's a really well thought out product. I'm a senior IT consultant and I do a lot of work with spreadsheets but not so much that I can remember all of the tricks. The way you guys slice it up and get to the point quickly is very helpful. I really only use about 5-10% of the material but it is super helpful.
Tom
END_OF_DOCUMENT_TOKEN_TO_BE_REPLACED