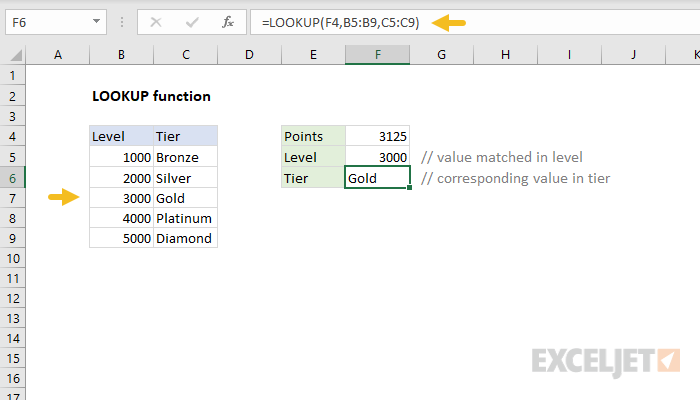 LOOKUP has default behaviors that make it useful when solving certain problems. For example, LOOKUP can be used to retrieve an approximate-matched value instead of a position and to find the last value in a row or column. LOOKUP assumes that values in lookup_vector are sorted in ascending order and always performs an approximate match. When LOOKUP can't find a match, it will match the next smallest value.

In the example shown above, the formula in cell F5 returns the value of the match found in column B. Note that result_vector is not provided:

The formula in cell F6 returns the corresponding Tier value from column C. Notice in this case, both lookup_vector and result_vector are provided:

In both formulas, LOOKUP automatically performs an approximate match and it is therefore important that lookup_vector is sorted in ascending order.

LOOKUP can be used to get the value of the last filled (non-empty) cell in a column. In the screen below, the formula in F6 is: 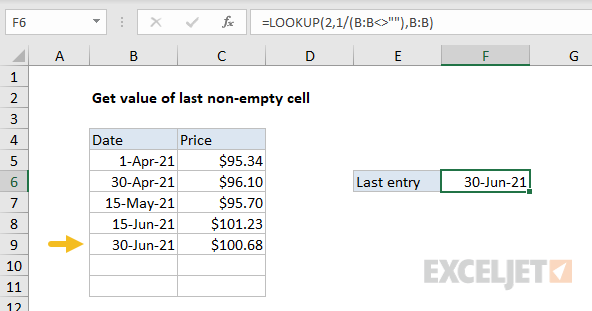 Note the use of a full column reference. This is not an intuitive formula, but it works well. The key to understanding this formula is to recognize that the lookup_value of 2 is deliberately larger than any values that will appear in the lookup_vector. Detailed explanation here.

Similar to the above example, the lookup function can be used to look up the latest price in data sorted in ascending order by date. In the screen below, the formula in G5 is: 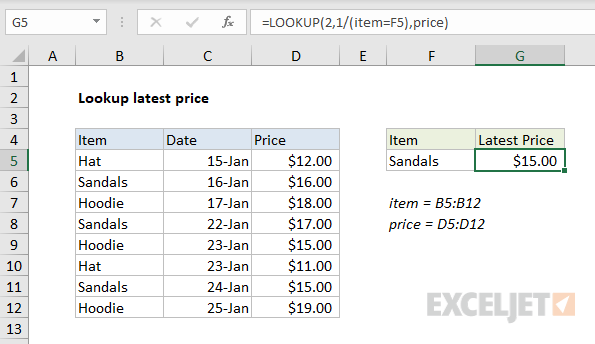 When lookup_value is greater than all values in lookup_array, default behavior is to "fall back" to the previous value. This formula exploits this behavior by creating an array that contains only 1s and errors, then deliberately looking for the value 2, which will never be found. More details here.

The LOOKUP function has an array form as well. In the array configuration, LOOKUP takes just two arguments: the lookup_value, and a single two-dimensional array:

The vertical and horizontal arrays contain the same values; only the orientation is different.

Note: Microsoft discourages the use of the array form and suggests VLOOKUP and HLOOKUP as better options.

Get date associated with last entry
Working from the inside out, the expression C5:G5"" returns an array of true and false values: {FALSE,TRUE,FALSE,FALSE,FALSE} The number 1 is divided by this array, which creates a new array composed of either 1's...

Get last entry by month and year
Note: the lookup_value of 2 is deliberately larger than any values in the lookup_vector, following the concept of bignum. Working from the inside out, the expression: (TEXT($B$5:$B$13,"mmyy")=TEXT(E5,...

Lookup latest price
The LOOKUP function assumes data is sorted, and always does an approximate match. If the lookup value is greater than all values in the lookup array, default behavior is to "fall back" to the previous value. This...

Extract unique items from a list
The core of this formula is a basic lookup with INDEX: =INDEX(list,row) In other words, give INDEX the list and a row number, and INDEX will retrieve a value to add to the unique list. The hard work is figuring out...

SUMIFS vs other lookup formulas
If you are new to the SUMIFS function, you can find a basic overview with many examples here. The SUMIFS function is designed to sum numeric values based on one or more criteria. In specific cases however, you may be...

Lookup last file version
This formula uses the LOOKUP function to find and retrieve the last matching file name. The lookup value is 2, and the lookup_vector is created with this: 1/(ISNUMBER(FIND(G6,files))) Inside this snippet, the FIND...

Get value of last non-empty cell
In this example, the goal is to get the last value in column B, even when data may contain empty cells. This is one of those puzzles that comes up frequently in Excel, because the answer is not obvious. One way to do it...

Lookup value between two numbers
The LOOKUP function does an approximate match lookup in one range, and returns the corresponding value in another. Although the table in this example includes both maximum and minimum values, we only need to use the...

Get last match cell contains
Context: you have a list of things in the named range "things" (E5:E8), and you want to check cells in column B to see if they contain these things. If so, you want to return the last item from"things" that was found...

Highlight approximate match lookup conditional formatting
This formula uses 4 named ranges, defined as follows: width=K6 height=K7 widths=B6:B11 heights=C5:H5 Conditional formatting is evaluated relative to every cell it is applied to, starting with the active cell in the...

I have tried several other Excel training programs, and yours has been the best by far. -Pete