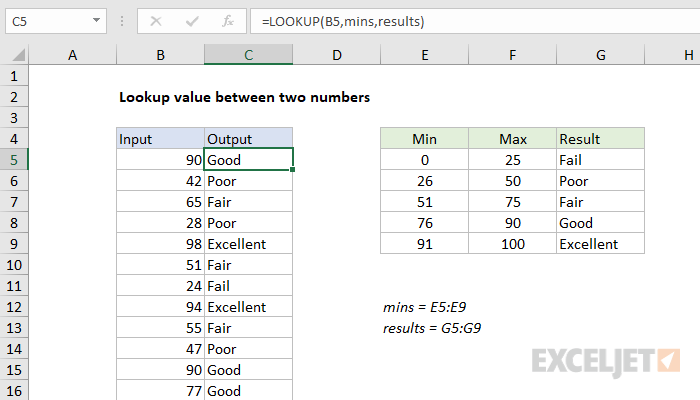 To lookup values between two values and return a corresponding result, you can use the LOOKUP function and a sorted table. In the example shown, the formula in C5 is:

The LOOKUP function does an approximate match lookup in one range, and returns the corresponding value in another.

Although the table in this example includes both maximum and minimum values, we only need to use the minimum values. This is because when LOOKUP can't find a match, it will match the next smallest value. LOOKUP is configured like this:

Note: values in the lookup vector must be sorted in ascending order.

Although the example above works fine, and effectively locates a value "between" a min and max in the lookup table, it really only uses the min values. With a named range "maxs" for maximum values, you can write a literal version of the formula like this:

This version returns the associated value in the result vector when the value in B5 is literally between both the min and max value in a given row. In case of duplicates, this formula will return the last match. Explanation of logic is here.

My Lord where have you been all my life?...I've learned more awesome tricks/functions in one afternoon from you than in the last 10 years.
Robert
END_OF_DOCUMENT_TOKEN_TO_BE_REPLACED