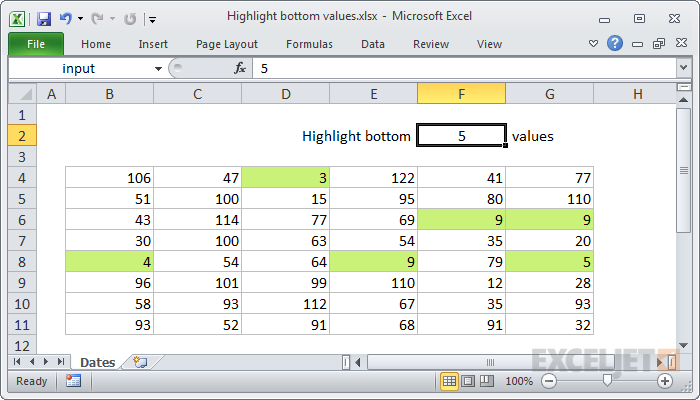 In this example, the goal is to highlight the 5 bottom values in B4:G11 where the number 5 is a variable set in cell F2.

This formula is based on the SMALL function, which returns the nth smallest value from a range or array of values. The range appears as the first argument in SMALL, and the value for "n" appears as the second:

In the example, the input value (F2) is 5, so SMALL will return the 5th smallest value in the data, which is 9. The formula then compares each value in the data range with 9, using the less than or equal to operator:

Any cell with a value less than or equal to 9 triggers the rule, and the conditional formatting is applied.

Just wanted to say thanks for sharing useful Excel tips online. There are so many websites that provide Excel tips online, but this is my go-to as your examples and explanations are easy to understand.
Amy
END_OF_DOCUMENT_TOKEN_TO_BE_REPLACED