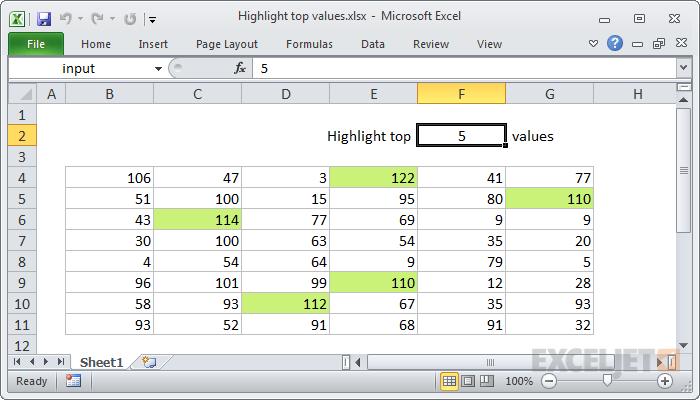 To highlight the highest values in a set of data with conditional formatting, you can use a formula based on the LARGE function.

In the example shown, the formula used for conditional formatting is:

This formula is based on the LARGE function, which returns the nth largest value from a range or array of values. The range appears as the first argument in LARGE, and the value for "n" appears as the second:

In the example, the input value (F2) is 5, so LARGE will return the 5th largest value in the data, which is 110. The formula then compares each value in the data range with 110, using the greater than or equal to operator:

Any cell with a value greater than or equal to 110 triggers the rule, and the conditional formatting is applied.

I wanted to thank you for your site. I used it heavily when I started working at internships in college and I am now a PhD student who still finds her way back on the site for help. I really appreciate how straightforward and helpful your content is.
Melissa
END_OF_DOCUMENT_TOKEN_TO_BE_REPLACED