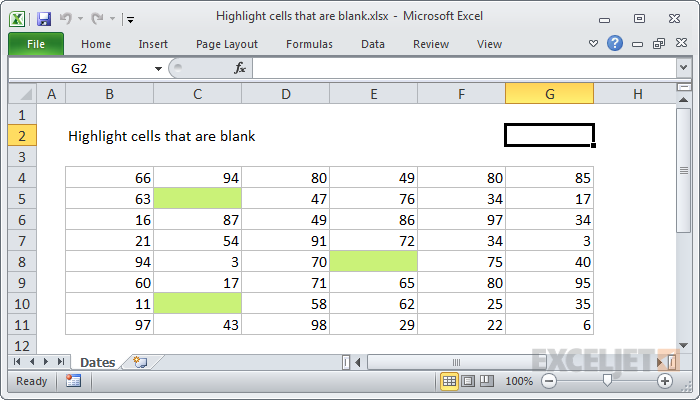 Once you save the rule, you'll see the formatting applied to all empty cells.

The ISBLANK function only returns TRUE when cell are actually empty. If a cell contains a formula that returns an empty string ("") ISBLANK won't see these cells as blank, and won't return true, so they won't be highlighted. In this way, ISBLANK would be better thought of as "ISEMPTY" (Hat tip, Mike Girvin).

If you want to highlight cells that are blank and cells that just appear blank, you can use this formula instead:

The LEN function returns the length of text as a number. A cell that contains an empty string ("") will also have a length of zero, so the formula will TRUE for both "blank" and "empty" cells.

To conditionally format cells that are not blank, you can use a formula like this:

The NOT function reverses the logic.

My Lord where have you been all my life?...I've learned more awesome tricks/functions in one afternoon from you than in the last 10 years.
Robert
END_OF_DOCUMENT_TOKEN_TO_BE_REPLACED