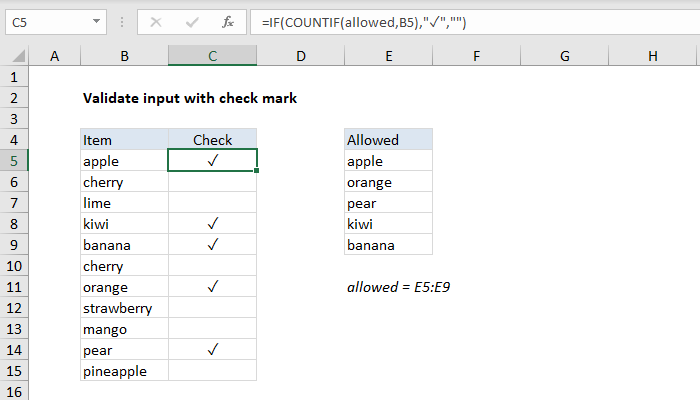 To display a check mark if a value is "allowed" based on an existing list of allowable values, you can use a formula based on the IF function together with the COUNTIF function. In the example show, the formula in C5 is:

where allowed is the named range E5:E9.

This formula is a good example of nesting one function inside another. At the core, this formula uses the IF function set up to return a check mark (✓) when a logical test returns TRUE:

If the test returns FALSE, the formula returns an empty string (""). For the logical test, we are using the COUNTIF function like this:

COUNTIF counts occurrences of the value in B5 in named range allowed (E5:E9). This may seem "backwards" to you, but if you think about it, it makes sense. If the value in B5 is found in the allowed list of values , COUNTIF will return a positive number (in this case 1). If not, COUNTIF will return zero. Excel will evaluate any non-zero number as TRUE, so this works perfectly as the logical test for IF.

The example above shows allowed values in a range of cells, but allowed values can also be hard-coded into the formulas as an array constant like this:

Inserting a check mark character in Excel can be surprisingly challenging and you will find many articles on the internet explaining various approaches. The easiest way to get the check mark character (✓) used in this formula into Excel is simply to copy and paste it. If you are copying from this web page, paste into the formula bar to avoid dragging in unwanted formatting. You can also copy and paste directly from the attached worksheet.

If you have trouble with copy and paste, try this variation. The character itself is Unicode 2713 (U+2713), and can also be entered in Excel with the UNICHAR function like this:

So, the original formula can be written like this:

Note: the UNICHAR function was introduced in Excel 2013.

The basic idea in this formula can be extended in many clever ways. For example the screenshot below shows a formula that returns a check mark only when all test scores are at least 65: 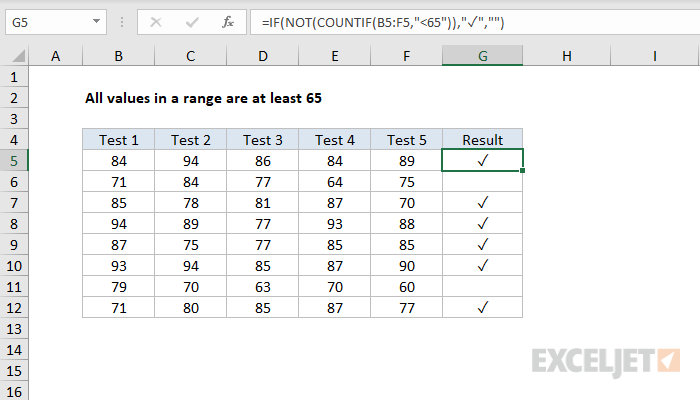 The formula in G5 is:

The NOT function reverses the result from COUNTIF. If you find this confusing, you can alternately restructure the IF formula like this:

Note: you can also use conditional formatting to highlight valid or invalid input, and data validation to restrict input to allow only valid data.

All values in a range are at least
At the core, this formula uses the COUNTIF function to count any cells that fall below a given value, which is hardcoded as 65 in the formula: COUNTIF ( B5:F5 , "<65" ) In this part of the formula, COUNTIF will return a positive number...

If cell is not blank
In this example, column D records the date a task was completed. Therefore, if the column contains a date (i.e. is not blank), we can assume the task is complete. The formula in cell E5 uses the IF function to check if D5 is "not empty". If so, the...

All cells in range are blank
Working from the inside out, this formula contains an expression inside SUMPRODUCT that tests each cell in a range like so: -- ( B5:D5 <> "" ) Inside the parentheses, the result of B5:D5 "" looks like this: { TRUE , FALSE , TRUE }...