If cell is not blank 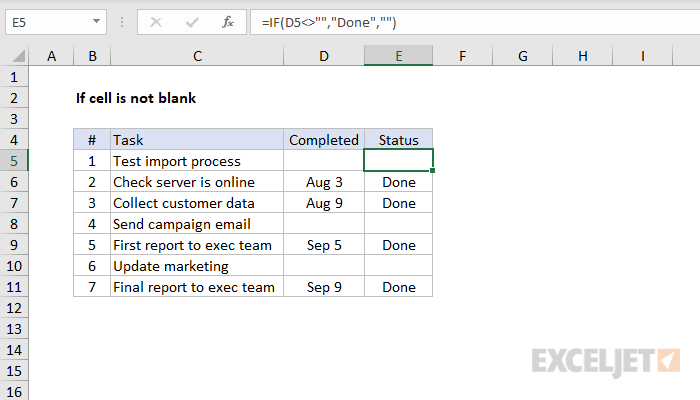 To test if a cell is not blank (i.e. has content), you can use a formula based on the IF function. In the example shown, the formula in cell E5 is:

As the formula is copied down it returns "Done" when a cell in column D is not blank and an empty string ("") if the cell is blank.

In this example, the goal is to create a formula that will return "Done" in column E when a cell in column D contains a value. In other words, if the cell in column D is "not blank", then the formula should return "Done". In the worksheet shown, column D is is used to record the date a task was completed. Therefore, if the column contains a date (i.e. is  not blank), we can assume the task is complete. This problem can be solved with the IF function alone or with the IF function and the ISBLANK function. It can also be solved with the LEN function. All three approaches are explained below.

The IF function runs a logical test and returns one value for a TRUE result, and another value for a FALSE result. You can use IF to test for a blank cell like this:

In the first example, we test if A1 is empty with ="". In the second example, the <> symbol is a logical operator that means "not equal to", so the expression A1<>"" means A1 is "not empty". In the worksheet shown, we use the second idea in cell E5 like this:

If D5 is "not empty", the result is "Done". If D5 is empty, IF returns an empty string ("") which displays as nothing. As the formula is copied down, it returns "Done" only when a cell in column D contains a value. To display both "Done" and "Not done", you can adjust the formula like this:

Notice the TRUE and FALSE results have been swapped. The logic now is if cell D5 is blank. To maintain the original logic, you can nest ISBLANK inside the NOT function like this:

The NOT function simply reverses the result returned by ISBLANK.

This is a much more literal formula. We are not asking Excel if A1 is blank, we are literally counting the characters in A1. The LEN function will return a positive number only when a cell contains actual characters.

Just wanted to say thanks for sharing useful Excel tips online. There are so many websites that provide Excel tips online, but this is my go-to as your examples and explanations are easy to understand.
Amy
END_OF_DOCUMENT_TOKEN_TO_BE_REPLACED