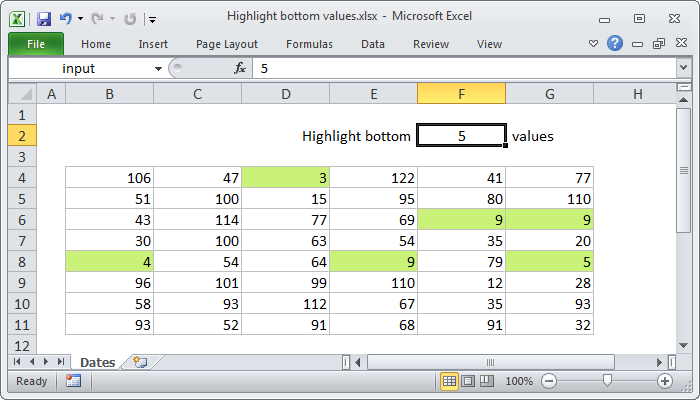 In this example, the goal is to highlight the 5 bottom values in B4:G11 where the number 5 is a variable set in cell F2.

This formula is based on the SMALL function, which returns the nth smallest value from a range or array of values. The range appears as the first argument in SMALL, and the value for "n" appears as the second:

In the example, the input value (F2) is 5, so SMALL will return the 5th smallest value in the data, which is 9. The formula then compares each value in the data range with 9, using the less than or equal to operator:

Any cell with a value less than or equal to 9 triggers the rule, and the conditional formatting is applied.

Highlight top values
This formula uses two named ranges: data (B4:G11) and input (F2). These are for readability and convenience only. If you don't want to use named ranges, make sure you use absolute references for both of these ranges in the formula. This formula is...

Highlight 3 smallest values with criteria
Inside the AND function there are two logical criteria. The first is straightforward, and ensures that only cells that match the color in E5 are highlighted: $B3 = $E$5 The second test is more complex: $C3 <= SMALL ( IF ( color = $E$5 , amount...
Related functions

Love your website. The info is clear to follow and very helpful for people like me who search for formulas when in middle of building a spreadsheet. Keep up the great work and thank you very much. -Love your website