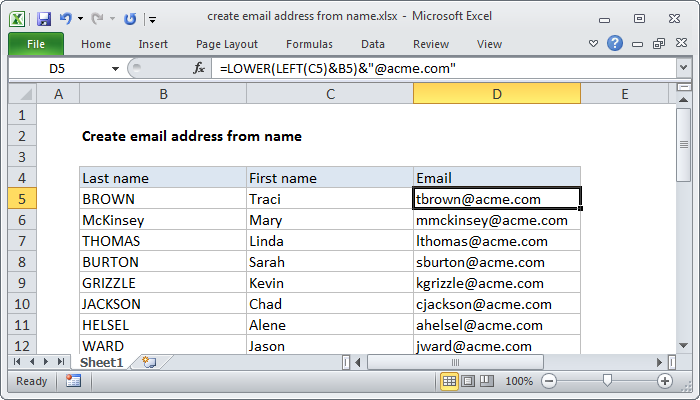 To build email addresses using first and last names, you can use a formula that concatenates values, with help from the LOWER and LEFT functions as needed.

The first letter of the first name is then joined to the last name using the concatenation operator (&), and the result is wrapped in the LOWER function, which forces all text to lower case.

Finally, result is jointed again to "@" and then to the domain. The domain is kept separate for convenience only. The formula could be written like this:

To simply the formula, you could create a named range "domain" to hold the domain name, then rewrite the formula like this:

Changing the value in the named range will then update all email addresses at once.

The Excel LOWER function converts a text string to all lowercase letters. Numbers, punctuation, and spaces are not affected.

How to change case with UPPER LOWER and PROPER
In this video we show how to use the UPPER, LOWER, and PROPER functions to transform case with a formula.
Related courses
Core Formula