How to concatenate in Excel

Concatenation is one of the most important operations in more advanced formulas. This article explains how to perform concatenation manually with the ampersand operator (&) and with the three Excel functions designed for concatenation: CONCATENATE, CONCAT, and TEXTJOIN.

One of the most important operations in Excel formulas is concatenation. In Excel formulas, concatenation is the process of joining one value to another to form a text string. The values being joined can be hardcoded text, cell references, or results from other formulas.

There are two primary ways to concatenate in Excel:

In the article below, I'll focus first on manual concatenation with the ampersand operator (&), since this should be your go-to solution for basic concatenation problems. Then I'll introduce the three Excel functions dedicated to concatenation: CONCATENATE, CONCAT, and TEXTJOIN. These functions can make sense when you need to concatenate many values at the same time. As with so many things in Excel, the most important thing is to understand the basics first.

Concatenation is the operation of joining values together to form text. For example, to join "A" and "B" together with concatenation, you can use a formula like this:

Both of the formulas above return text values, even though some of the values being joined are numeric. In fact, you can transform a number to text by concatenating an empty string ("") to the number like this:

You will sometimes see this technique in a lookup formula that involves numbers and text. Notice in all examples above, text values appear in double quotes (""), while numeric values are not quoted. For example, while 100 is a numeric value, "100" is a text value.

To explain how concatenation works in a formula in a worksheet, let's start with a simple example that shows how to concatenate a text string to a value in a cell. With the value 10 in cell B5, this formula will return "Cell B5 contains 10":

There are three things to note in the formula above:

In brief, hardcoded text values are enclosed in double quotes, while cell references, math operators, and function names are not enclosed in quotes.

Now let's extend the text message above to add a period (.) at the end. In the screen below, the formula in D5 is:

In the new formula above, notice two things:

Naturally, this is a regular Excel formula that will recalculate automatically. If we change the value in B5 to 15, the new result is "Cell B5 contains 15.".

There's nothing special about concatenation, so you can mix in conditional formula logic as needed. In the formula below, we're using the same basic structure as the example above, with a different message:

We start the message, concatenate the value from B5, and concatenate the period. Now let's extend the formula with some conditional logic. Suppose we want to add the text "Nice work!" to the end of the message when the score is 85 or greater. To do this, we can add the IF function like this:

This looks complicated, so let's break it into parts. Part 1 is the same as before:

Part 2 adds conditional logic based on the IF function:

If the score in cell B5 is 85 or higher, IF returns " Nice work!". Otherwise, IF returns an empty string (""). The final formula simply concatenates part 1 to part 2:

Notice we need another ampersand (&) to join part 1 and part 2, since IF is a function name. Also notice that we have included a space (" ") at the start of " Nice work!" so that this text doesn't run into the period*. The screen below shows how the two formulas compare:

*Note: in more complex formulas that involve concatenation, you will find you frequently need to adjust space or punctuation to keep the message legible.

One tricky aspect of concatenation in Excel is number formatting. Number formats in Excel are a powerful way to control the display of numeric values, but they are not part of the number. This means that number formatting will be lost when you concatenate a formatted number. For example, in the worksheet below, B5 contains 99 formatted with the Currency number format. However, when B5 is concatenated in the formula in D5:

the Currency formatting is lost:

You can add number formatting during concatenation by using the TEXT function in your formula. The formula in D6 is:

In this formula, we place the number in B5 inside the TEXT function and provide a basic Currency number format. As a result, the number 99 is displayed as $99.00 in the result.

Dates are also numbers in Excel and their display is controlled by Date number formatting:

In the worksheet below, the formula in D5 is:

Notice the date appears as a raw numeric value. The formula in D5 uses the TEXT function to apply a date format during concatenation:

Excel provides a large number of number formats you can use with the TEXT function. For more details, see Excel custom number formats.

The CONCATENATE function is an older function now replaced by the CONCAT function. CONCATENATE allows you to perform simple concatenation only. The values to concatenate and any delimiters are supplied as separate arguments, as seen in the example below:

The main benefit of the CONCATENATE function is that values are supplied as separate arguments, with no need for an ampersand (&). The formulas in F5:F8 are:

Note that hardcoded text values must still be enclosed in double quotes (""), just like manual concatenation with the & operator.

The CONCAT function replaces the CONCATENATE function in newer versions of Excel. The big difference between the two functions is that CONCAT will accept a range of values:

Notice the first two formulas supply a range directly to CONCAT as a single argument. The ability to provide a range is the primary advantage of CONCAT over CONCATENATE. The next two formulas supply individual values because they are joining values with a delimiter – a hyphen ("-) in the first formula and a comma with a space (", ") in the second formula. Although CONCAT can handle a range, there is no way to provide a delimiter as a separate argument. For this, we need to use the TEXTJOIN function.

Finally, there is the TEXTJOIN function. Like the CONCAT function, TEXTJOIN is able to accept a range or array of values to concatenate. However, TEXTJOIN provides two additional features that make it especially useful:

The syntax for TEXTJOIN is:

The first argument, delimiter, is the delimiter to use when joining values. The second argument, ignore_empty, is a Boolean that indicates whether TEXTJOIN should ignore or process empty values. The remaining arguments, text1, text2, etc. represent the values to be joined. The worksheet below shows TEXTJOIN in action: 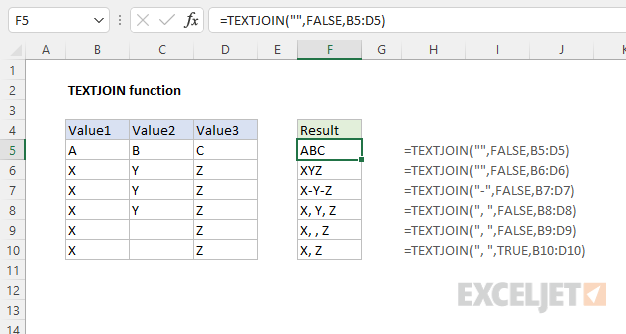 Notice the first two formulas supply an empty string ("") for delimiter, which causes TEXTJOIN to join values directly. The next four formulas all supply one or more characters for delimiter. In cell F9, you can see how the delimiter is repeated when a range contains empty values and ignore_empty is set to FALSE. In F10, ignore_empty has been set to TRUE, and TEXTJOIN ignores the empty value in cell C10.

Below are more examples that show how concatenation can be used in Excel formulas:

Here are some videos from our online training that feature concatenation:

how to concatenate in Excel.xlsx