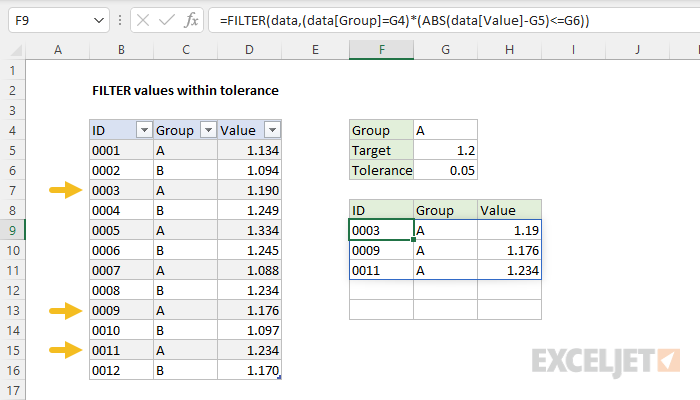 To extract and display values within a given tolerance from a larger set of data, you can use the FILTER function together with the ABS function. In the example shown, the formula in F9 is:

In this example, the goal is to list values in a given group that are within a given tolerance. The group is set in cell G4, and the target value is entered in cell G5. The allowed tolerance is entered in cell G6. The data comes from an Excel Table called data in the range B5:D16. The solution is built on the FILTER function which can be used to extract and list data that meets multiple criteria. The beauty of this formula is that tolerance calculations do not need to be in the source data. The FILTER function creates the data it needs on the fly. When any of the variable inputs in G5:G6 are changed, or if source data changes, the results update immediately.

This article assumes you are familiar with Excel Tables and the FILTER function. If not, see:

In order to extract records where the group is "A", we can use FILTER like this:

Here, the array argument is the entire table, since we want both columns in the output. The include argument is supplied as a simple logical expression that returns TRUE or FALSE for each value in the Group column:

Because we want the group to be a variable input, we need to replace the hardcoded text string "A" with a reference to cell G4, which allows the user to change the group as desired:

Now when a user types "B" into cell G4, FILTER will extract all values from group B.

The next task in the formula is to test for values within a given tolerance, where the target value comes from cell G5, and the acceptable tolerance is defined in cell G6. The generic logical expression for this test looks like this:

The ABS function is used to convert negative differences to positive values. See this formula for a more detailed explanation. Mapping the cell references in the example to the generic formula, we get this logical expression:

This expression will return TRUE or FALSE for each number in the Value column. To extract all values within tolerance, ignoring group, we can use the expression above as the include argument in FILTER:

FILTER will ignore group and return all values within tolerance.

Now we need to combine both logical conditions above into a single formula. For this, we use Boolean logic. Because we want to join the two expressions with AND (i.e. we want to enforce both conditions) we use the multiplication operator between the expressions like this:

Finally, we need to place the expression into the FILTER function as the include argument:

This is the final formula. With "A" in G4, 1.2 in G5, and 0.05 in G6, the FILTER function returns rows in the table where values in Group A are within +/- 0.05 of 1.2. These results are returned to cell F9 and spill onto the worksheet. If any of the variable inputs in G4:G6 are changed, results are immediately updated.

Filter on values out of tolerance

To reverse the logic explained above to show values that are out of tolerance, simply change the logical operator in the tolerance expression from less than or equal to (<=), to greater than (>):

The screen below shows the result: 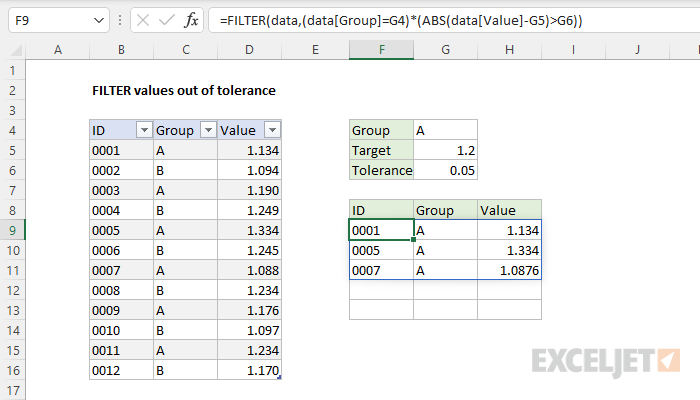 I wanted to thank you for your site. I used it heavily when I started working at internships in college and I am now a PhD student who still finds her way back on the site for help. I really appreciate how straightforward and helpful your content is.
Melissa
END_OF_DOCUMENT_TOKEN_TO_BE_REPLACED