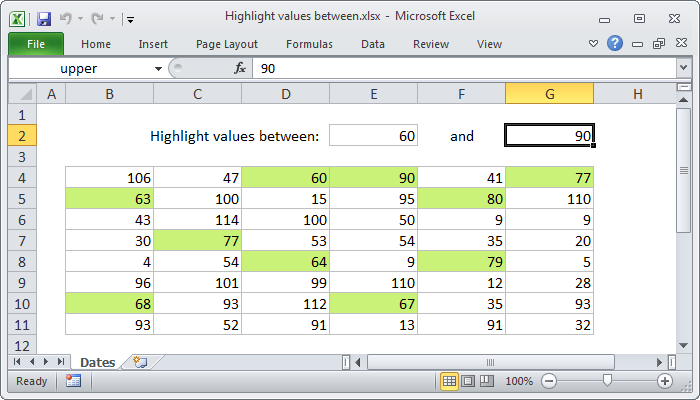 Note: Excel contains many built-in "presets" for highlighting values above / below / between / equal to certain values, but if you want more flexibility you can apply conditional formatting using your own formula as explained in this article.

If you want to use conditional formatting to highlight cells that are "greater than X and less than Y", you can use a simple formula that returns TRUE when a value meets those conditions. For example, if you have numbers in the range B4:G11, and want to highlight cells with a numeric value over 60 and less than 90, select B4:G11 and create a conditional formatting rule that uses this formula:

When you use a formula to apply conditional formatting, the formula is evaluated for each cell in the range, relative to the active cell in the selection at the time the rule is created. So, in this case, if you apply the rule to B4:G11, with B4 as the active cell, the rule is evaluated for each of the 40 cells in B4:G11 because B4 is entered as a fully relative address. Because we are using AND with two conditions, the formula returns TRUE only when both conditions return TRUE, triggering the conditional formatting.

Highlight values not between X and Y
When you use a formula to apply conditional formatting, the formula is evaluated for each cell in the range, relative to the active cell in the selection at the time the rule is created. So, in this case, if you apply the rule to B4:G11, with B4 as...
Related functions