Get percentage of total 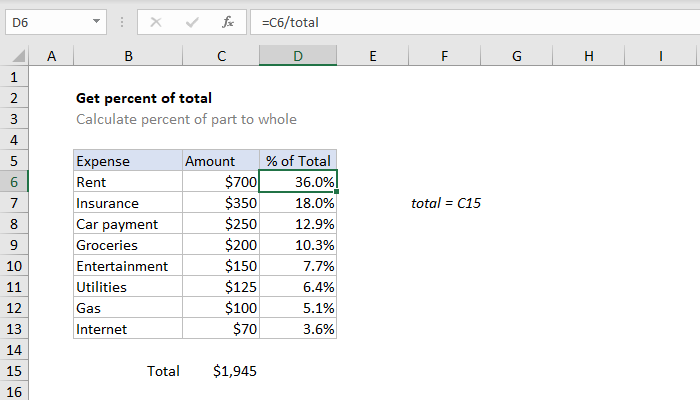 To calculate the percent of a total (i.e. calculate a percent distribution), you can use a formula that simply divides a given amount by the total. In the example shown, the formula in D6 is:

where total is the named range C15.

Note: the result is formatted with Percentage number format to show 36%, 18%, etc.

In this example, the goal is to work out the "percent of total" for each expense shown in the worksheet. In other words, given that we know the total is $1945, and we know Rent is $700, we want to determine that Rent is 36% of the total.

The total already exists in the named range total (C15) which contains a formula based on the SUM function:

In mathematics, a percentage is a number expressed as a fraction of 100. For example, 85% is read as "Eighty-five percent" and is equivalent to 85/100 or 0.85. To calculate the "percent of total" for a given expense, we need to divide the amount of the expense by the total of all expenses. In cell D6, the ratio is 700/1945, which is approximately 0.36 (36% when formatted as a percentage). The formula in D6, copied down, is:

As the formula is copied down, we get a percent of total for each item shown in the table.

The numbers in column D are decimal values that express a ratio. In cell D6, the ratio is 700/1945, which is approximately 0.36. To format a number like this as a percentage with the percent sign (%), apply the Percentage number format.

To display a percentage in Excel, use the Percentage number format, which will automatically display a decimal value as a percentage. If you want instead a simple number without a percent sign, just multiply by 100:

Get amount with percentage
In this example, the goal is to convert the percentages shown in column C to amounts, where the total of all amounts is given as $1945. In other words, if we know Rent is 36.0%, and the total of all expenses is $1945, we want to calculate that Rent...

Project complete percentage
In this example if a task is marked "Done", then it is considered complete. The goal is to calculate the percent complete for the project by showing the ratio of complete tasks to total tasks, expressed as a percentage. The formula in F6 is: =...

Cap percentage at specific amount
This formula uses the MIN function to make a decision that might otherwise be handled with the IF function . Although MIN is usually used to return the minimum value in a data set with many numbers, it also works fine for "lesser of the two"...

Summary count with percentage breakdown
In this example, the goal is to calculate a count and percentage for each category shown in column B. For convenience, the category values in column B are in the named range category (B5:B122). To generate the count, we use the COUNTIF function ...

Get percent of year complete
The goal in this example is to return the amount of time completed in a year as a percentage value, based on any given date. In other words, when given the date July 1, 2021, the formula should return 50% since we are halfway* through the year. *By...

Get profit margin percentage
In this example, the goal is to calculate and display profit margin as a percentage for each of the items shown in the table. In other words, given a price of $5.00 and a cost of $4.00, we want to return a profit margin of 20%. Each item in the...
Related courses
Core Formula