Get amount with percentage 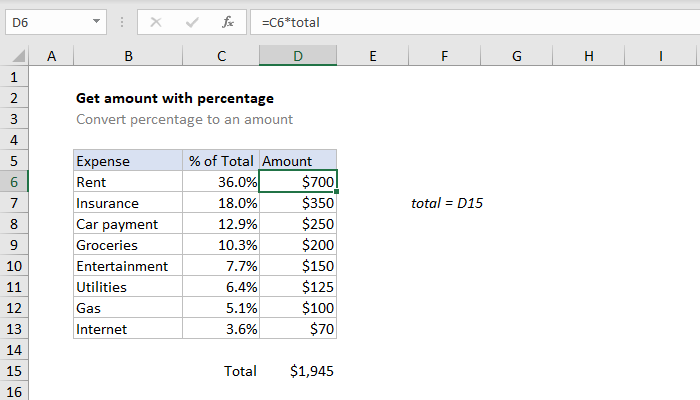 To calculate the amount represented by a percentage when the total is known, use a formula that multiplies the total by the percentage. In the example shown, the formula in D6, copied down, is:

where total is the named range D15 and column C contains decimal values with the percentage number format applied.

In this example, the goal is to convert the percentages shown in column C to amounts, where the total of all amounts is given as $1945. In other words, if we know Rent is 36.0%, and the total of all expenses is $1945, we want to calculate that Rent is $700. With "x" as the number we want to find, we have:

Note: in the example, the percentage values in column C are unrounded decimal numbers like 0.359897172, which accounts for the 0.20 difference in the calculation above.

The total of all expenses is in cell D15, which is also the named range "total". To perform this calculation in Excel, we simply multiply the percentage in column C by the total in cell D15. The formula in D6, copied down is:

Named ranges behave like absolute references by default, so the equivalent formula without a named range  is:

For each expense in the table, Excel returns a calculated amount.

To display these numbers as a percentage with the percent sign (%), the Percentage number format has been applied to C6:C13.

Cap percentage at specific amount
This formula uses the MIN function to make a decision that might otherwise be handled with the IF function . Although MIN is usually used to return the minimum value in a data set with many numbers, it also works fine for "lesser of the two"...

Summary count with percentage breakdown
In this example, the goal is to calculate a count and percentage for each category shown in column B. For convenience, the category values in column B are in the named range category (B5:B122). To generate the count, we use the COUNTIF function ...

Percent of students absent
In this example, the goal is to answer the question "What percentage of students were absent from each class". In other words, given a class with 30 students total, 27 of which were present, we want to return 10% absent. The general formula for this...
Related videos

How to use percentage formatting in Excel
In this video we show you how to use the Percentage number format.
Related courses
Core Formula

Your site is full of great content and easy to follow. Love the videos with examples. -Jon