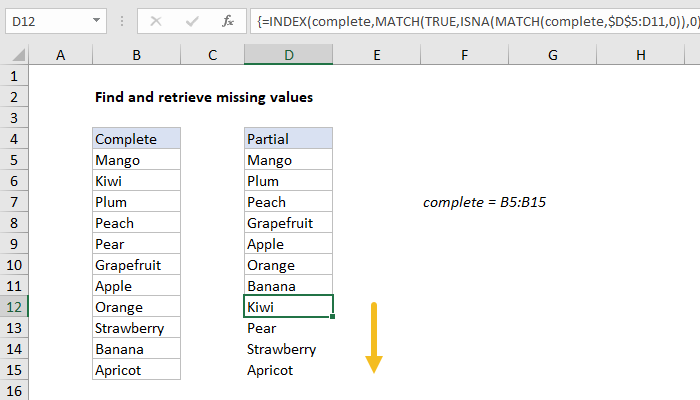 To compare two lists and pull missing values from one list to the other, you can use an array formula based on INDEX and MATCH. In the example shown, the last value in list B is in cell D11. The formula in D12, copied down, is:

Working from the inside out, the core of this formula is the inner MATCH expression:

The result of MATCH is an array of numbers and #N/A errors, where numbers represent values in the complete list which exist in the partial list; and errors represent missing values:

The ISNA function returns this array to the outer MATCH as the lookup array. The MATCH function always returns the first match found, so match will return the position (row) of the first missing value found. This result is returned to INDEX as the row number, with the named range "complete" provided as the array.

In D13, "kiwi" is now included in the expanding reference, so the first missing value is "pear":

And so on. Once the all missing values have been added, the formula will return the #N/A error.

Highlight missing values
To compare lists and highlight values that exist in one but not the other, you can apply conditional formatting with a formula based on the COUNTIF function. For example, to highlight values A1:A10 that don't exist C1:C10, select A1:A10 and create a...

Find missing values
To find out what values in one list are missing from another list, you can use a simple formula based on the COUNTIF function. The COUNTIF function counts cells that meet supplied criteria, returning the number of occurrences found. If no cells that...

Count missing values
To count the values in one list that are missing from another list, you can use a formula based on the COUNTIF and SUMPRODUCT functions. In the example shown, the formula in H6 is: = SUMPRODUCT ( -- ( COUNTIF ( list1 , list2 ) = 0 )) Which returns 1...
Related functions

How to find missing values with COUNTIF
In this video, we'll take a look at how to use the COUNTIF function to solve a common problem: how to find values in one list that appear in another list.

How to use the MATCH Function for exact matches
In this video, we look at how the MATCH function can find the position of an item in a list. This is a key idea in INDEX and MATCH formulas.

How to look things up with INDEX
In this video, we look at how to configure INDEX to retrieve a value by row and column. This is the first half of the INDEX/MATCH equation.
See also
How to use INDEX and MATCH

Just wanted to say "Thank you" and I feel lucky I found your website! I work with contracts and your link lead me to a concise answer. No other link came close. -Karen