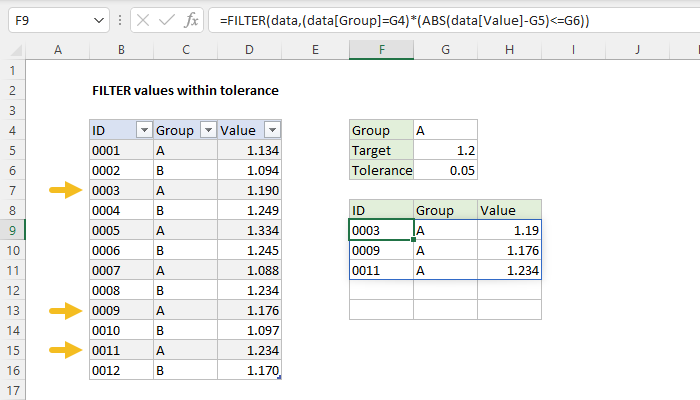 To extract and display values within a given tolerance from a larger set of data, you can use the FILTER function together with the ABS function. In the example shown, the formula in E9 is:

In this example, the goal is to list values in a given group that are within a given tolerance. The data comes from an Excel Table called "data" in the range B5:C16. The solution is built on the FILTER function which can be used to extract and list data that meets multiple criteria. The variable inputs to the formula come from the range F4:F5. When inputs change, the results update immediately.

In order to extract records where the group is "A", we can use FILTER like this:

Here, the array argument is the entire table, since we want both columns in the output. The include argument is supplied as a simple logical expression that returns TRUE or FALSE for each value in the Group column:

Because we want the group to be a variable input, we need to replace the hardcoded text string "A" with a reference to cell F4, which allows the user to change the group as desired:

Now when a user types "B" into cell F4, FILTER will extract all values from group B.

The next task in the formula is to test for values within a given tolerance, where the target value comes from cell F5, and the acceptable tolerance is defined in cell F6. The generic logical expression for this test looks like this:

The ABS function is used to convert negative differences to positive values. See this formula for a more detailed explanation. Mapping the cell references in the example to the generic formula, we get this logical expression:

This expression will return TRUE or FALSE for each number in the Value column. To extract all values within tolerance, ignoring group, we can use the expression as the include argument in FILTER:

FILTER will ignore group and return all values within tolerance.

Now we need to combine both logical conditions above into a single formula. For this, we use Boolean logic. Because we want to join the two expressions with AND (i.e. we want to enforce both conditions) we use the multiplication operator between the expressions like this:

Finally, we need to place this expression into the FILTER function as the include argument:

This is the final formula. With "A" in F4, 1.2 in F5, and 0.05 in F6, the FILTER function returns rows in the table where values in Group A are within +/- 0.05 of 1.2. These results are returned to cell E9 and spill onto the worksheet. If values in F4:F6 are changed, results are immediately updated.

FILTER on top n values
This formula uses the FILTER function to retrieve data based on a logical test constructed with the LARGE function. The LARGE function is a simple way to get the nth largest value in a range. Simply provide a range for the first argument ( array ),...

Biggest gainers and losers
In this example, the goal is to display the biggest 3 gainers and losers in a set of data where Start and End columns contain values at two points in time, and Change contains the percentage change in the values. The data in B5:E16 is defined as an...
Related functions