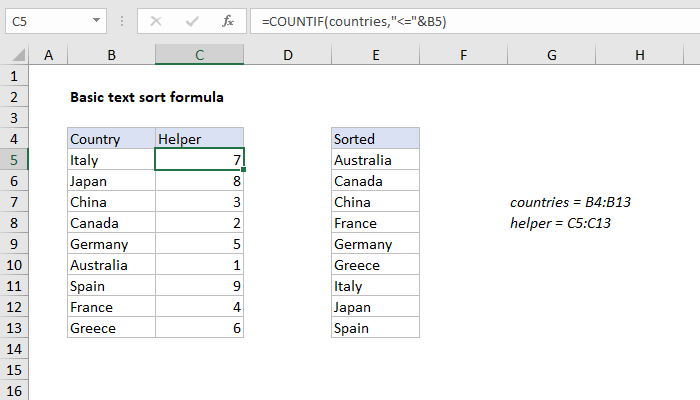 To dynamically sort text values in alphabetical order, you can use use a formula based on the COUNTIF function. In the example shown, the formula in C5 is:

where "countries" is the named range B4:B13

Note: in Excel 365, the SORT and SORTBY functions make the approach here unnecessary.

This formula uses the "greater than or equal to" operator with text, something you might not have tried before. When Excel compares text, it decides which value is "greater" than another based rules that follow the ASCII numbering scheme.

This is an INDEX and MATCH formula that uses an expanding reference to generate sequential numbers, which are fed into MATCH as lookup values. MATCH figures out where each number exists in the data, and INDEX retrieves the value at that position. See this page for a more detailed explanation.

If the data contains duplicate text values, the sequence of sort numbers will also contain duplicates, which will cause problems if you are trying to retrieve values with the INDEX function. To work around this problem, you can use a variation of the formula that increments duplicates with a second COUNTIF:

Display sorted values with helper column
This formula replies on a helper column that already contains a sequential list of numbers to represent an established sort order. The numbers in the helper column are independent from the operation of this formula. As long as the sequence is...

Random sort formula
This formula depends on two helper columns. The first helper column holds random values created with the RAND() function. The formula in C5, copied down is: = RAND () The RAND function generates a random value at each row. Note: RAND is a volatile...