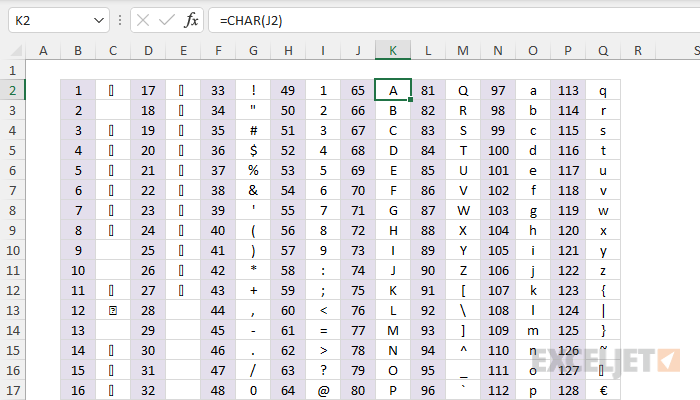 The numbers returned by the CHAR function in Excel come from ASCII. ASCII stands for "American Standard Code for Information Interchange" and is a 7-bit character set that contains characters from 0 to 127.

The original ASCII specification encodes 128 characters into numbers (see table below). These include the numbers 0 to 9, lowercase a-z, uppercase A-Z, and punctuation. The first 31 characters are non-printing "control codes", most of which are no longer used, with the exception of the carriage return (13), line feed (10), and tab (9).

To return the ASCII number for a character, you can use the CODE function:

Note: The Unicode character set is widely used these days on the web and in modern applications. Unlike ASCII, Unicode is a standard designed to support all of the world's languages, and has many thousands of characters. Excel has two functions designed to work with this extended character set: UNICHAR and UNICODE.

The table below shows the first 31 characters in ASCII, which are non-printing control codes. These codes were originally intended to control devices, and are no longer used, with the exception of the carriage return (13), line feed (10), and tab (9).

I want to thank you for all of the assistance that you have given me in the past, I truly appreciate it. I inform everyone at my place of work about your website, as I find it perhaps one of the best to understand. -Shane