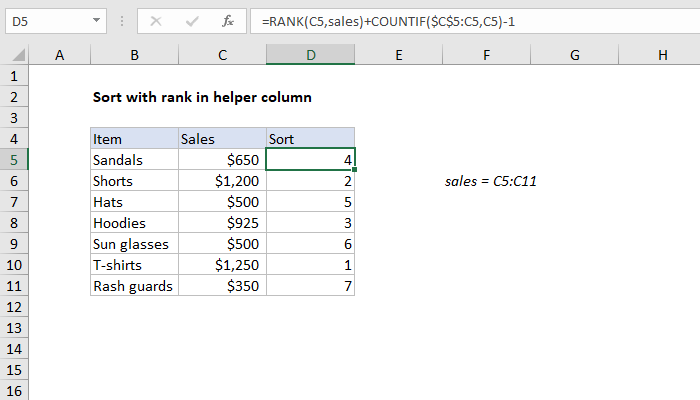 To dynamically sort data that contains only numeric values, you can use a helper column and a formula created with the RANK and COUNTIF functions. In the example shown, the formula in D5 is:

Note: this formula is the set-up for a formula that can extract and display data using a predefined sort order in a helper column. One example here.

The core of this formula is the RANK function, which is used to generate a rank of sales values, where the highest number is ranked #1:

Here, RANK uses the named range "sales" (C5:C11) for convenience. By default, RANK will assign 1 to the highest value, 2 to the second highest value, and so on. This works perfectly as long as numeric values are unique. However, to handle numeric values which contain duplicates, we need to use the COUNTIF function to break ties. This is done by adding the result of this snippet to the value returned by RANK:

Notice the range is entered as a mixed reference that will expand as the formula is copied down the table. As written, this reference will include the current row, so we subtract 1 to "zero out" the first occurrence. This means the expression will return zero for each numeric value until a duplicate is encountered. At the second instance, the expression will return 1, at the third instance, it will return 2, and so on. This effectively breaks ties, and allows the formula to generate a sequential list of numbers with no gaps.

Note: This formula is adapted from an example in the excellent book Control + Shift + Enter, by Mike Girvin.

Basic text sort formula
To dynamically sort text values in alphabetical order, you can use use a formula based on the COUNTIF function. In the example shown, the formula in C5 is: = COUNTIF ( countries , "<=" & B5 ) where "countries" is the named range B4:...

Sort numbers ascending or descending
To dynamically sort a list of numbers in ascending order, you can a simple formula based on the SMALL function with an expanding range . In the example shown, the formula in cell C5 is: = SMALL ( data , ROWS ( $B$5:B5 )) where "data" is the named...

Display sorted values with helper column
To retrieve and display values sorted with a helper column, you can use an INDEX and MATCH formula, with a little help from the ROWS function. In the example shown, the formula in F5 is: = INDEX ( sales , MATCH ( ROWS ( $D$5:$D5 ), sort , 0 )) which...

Random sort formula
To randomly sort existing values with a formula, you can use an INDEX and MATCH formula together with helper columns as shown in the screenshot. In the example shown, the formula in E5 is: = INDEX ( names , MATCH ( ROWS ( $D$5:$D5 ), sort , 0 ))...

The Excel RANK function returns the rank of a numeric value when compared to a list of other numeric values. RANK can rank values from largest to smallest (i.e. top sales) as well as smallest to largest (i.e. fastest time) values, using an...

I have just come across your website and within minutes of looking around I can confidently say that had I discovered this sooner, I would have saved myself many many hours of formula troubleshooting over the last several years. Very clear explanations for some fairly tricky problems I have been faced with and all incredibly easy to find! -Andy