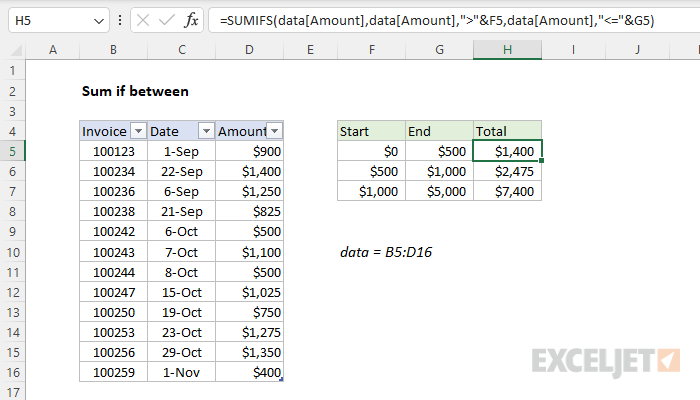 To sum numeric values that are between two numbers, you can use the SUMIFS function. In the example shown, the formula in cell H5 is:

Where data is an Excel Table in the range B5:D16.

In this example, the goal is to sum the amounts in the table using the "Start" and "End" values in columns F and G. For convenience, all data is in an Excel Table called data, which means we can use the structured reference data[Amount] to refer to amounts. An easy way to solve this problem is to use the SUMIFS function, as explained below.

The SUMIFS function can sum values in ranges based on multiple criteria. The basic function signature for SUMIFS looks like this:

In this case, we need to configure SUMIFS to sum values in the Amount column based on two criteria: one for amounts greater than zero (the value in cell F5) and one for amounts that are less than or equal to 500 (the value in E5). Conditions are supplied to SUMIFS as range/criteria pairs, so each condition will be composed of two arguments.  To start off, we provide the sum_range to SUMIFS, which contains the values we want to sum:

Next, we need to add the first condition, which is that amounts need to be greater than zero (the value in cell F5):

Here we provide data[Amount] as criteria_range1, and the  ">"&F5 for criteria1. Notice we need to concatenate the cell reference to the logical operators, and the operators are entered as text*, enclosed in double quotes (""). Next, we need to add the second condition, for amounts less than or equal to 500 (the value in cell E5):

As before, we need to concatenate the operator as text to cell C5. We enter this formula, it returns 1400, the total of all amounts greater than 0 and less than or equal to 500.  As the formula is copied down, it returns a new total in each row, based on the values in columns F and G. The structured reference data[Amount] behaves like an absolute reference and does not change. The references to F5 and G5 are relative and change at each new row.

* Note: SUMIFS is in a group of functions that split criteria into two parts. As a result, the syntax used for operators is different from other functions. See this article for details.

Just wanted to say thanks for sharing useful Excel tips online. There are so many websites that provide Excel tips online, but this is my go-to as your examples and explanations are easy to understand.
Amy
END_OF_DOCUMENT_TOKEN_TO_BE_REPLACED