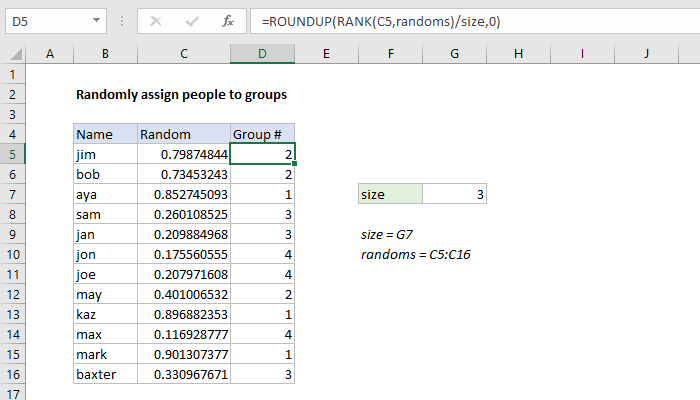 To randomly assign people to groups or teams of a specific size, you can use a helper column with a value generated by the RAND function, together with a formula based on the RANK and ROUNDUP functions. In the example shown, the formula in D5 is:

At the core of this solution is the RAND function, which is used to generate a random number in a helper column (column C in the example).

To assign a full set of random values in one step, select the range C5:C16, and type =RAND() in the formula bar. Then use the shortcut control + enter to enter the formula in all cells at once.

Note: the RAND function will keep generating random values every time a change is made the worksheet, so typically you will want to replace the results in column C with actual values using paste special to prevent changes after random values are assigned.

In column D, a group number is assigned with the following formula:

The RANK function is used to rank the value in C5 against all random values in the list. The result will be a number between 1 and the total number of people (12 in this example).

This result is then divided by "size", which represents the desired group size (3 in the example), which then goes into the ROUNDUP function as number, with num_digits of zero. The ROUNDUP function returns a number rounded up to the next integer. This number represents assigned group number.

The CEILING function can be used instead of ROUNDUP. Like the ROUNDUP function, CEILING also rounds up but instead of rounding to a given number of decimal places, CEILING rounds to a given multiple.

Randomly assign data to groups
The RANDBETWEEN function generates random numbers between two integers. The CHOOSE function takes a number as the first argument, and uses that number to select the "nth" item from the following arguments. So, in this formula, RANDBETWEEN generates...

Random text values
The CHOOSE function provides the framework for this formula. Choose takes a single numeric value as its first argument (index_number), and uses this number to select and return one of the values provides as subsequent arguments, based on their...

Random number from fixed set of options
The CHOOSE function does most of the work in this formula. Choose takes a single numeric value as its first argument (index_number), and uses this number to select and return one of the values provides as subsequent arguments, based on their numeric...
Related functions