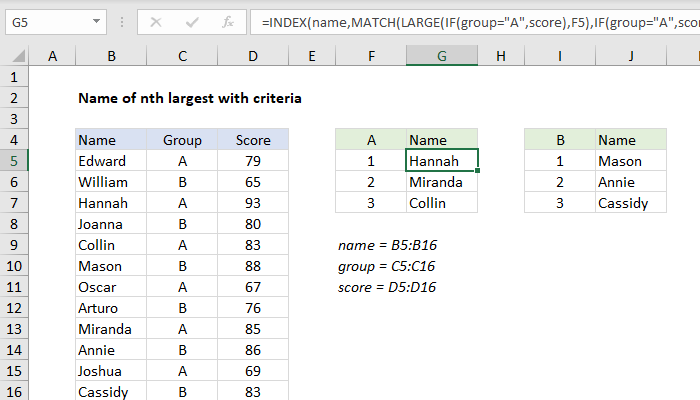 To get the name of the nth largest value with criteria, you can use INDEX and MATCH, the LARGE function, and a filter created with the IF function. In the example shown, the formula in cell G5, copied down, is:

Note: This an array formula that must be entered with control + shift + enter, except in Excel 365.

The LARGE function is an easy way to get the nth largest value in a range:

In this example, we can use the LARGE function to get a highest score, then use the score like a "key" to retrieve the associated name with INDEX and MATCH. Notice we are picking up the values for n from the range F5:F7, in order to get the 1st, 2nd, and 3rd highest scores.

The twist however in this case is that we need to distinguish between scores in group A and group B. In other words, we need to apply criteria. We do this with the IF function, which is used to "filter" values before they are evaluated with LARGE. As a generic example, to get the largest value (i.e. 1st value) in range2 where range 1 = "A", you can use a formula like this:

Note: using IF this way makes this an array formula.

Working from the inside out, the first step is to get the "1st" largest value in the data associated with Group A with the LARGE function:

In this case, the value in F5 is 1, so we are asking for the top score in Group A. When the IF function is evaluated, it tests each value in the named range group. The named range score is provided for value_if_true. This generates a new array, which is returned directly to the LARGE function:

Notice the only scores that survive the filter are from Group A. LARGE then returns the highest remaining score, 93, directly to the MATCH function as a lookup value. We can now simplify the formula to:

Now we can see that the MATCH function is configured use same filtered array we saw above. The IF function again filters out unwanted values, and the MATCH portion of the formula resolves to:

Since 93 appears in the 3rd position, MATCH returns 3 directly to the INDEX function:

The XLOOKUP function can also be used to solve this problem, using the same approach explained above:

As above, LARGE is is configured to work with an array filtered by IF, and returns a result of 93 to XLOOKUP as the lookup value:

The lookup array is also created by using IF as a filter on scores from Group A. With the return array provided as name (B5:B16). XLOOKUP returns "Hannah" as the final result.

nth largest value
The LARGE function is fully automatic — you just need to supply a range and an integer for"nth" to specify the ranked value you want. The official names for these arguments are "array" and "k". For example we can use LARGE to get the top 3 scores...

nth largest value with criteria
The LARGE function is fully automatic — you just need to supply a range and an integer for"nth" to specify the ranked value you want. The problem in this case is that we don't want LARGE to operate on every value in the range, just values that are...

nth smallest value
The SMALL function is fully automatic — you just need to supply a range and an integer for"nth" to specify the ranked value you want. The official names for these arguments are "array" and "k". Note: you can also use the MIN function to get the...

Sum top n values
In its simplest form, LARGE will return the "Nth largest" value in a range. For example, the formula: = LARGE ( B4:B13 , 2 ) will return the 2nd largest value in the range B4:B13 which, in the example above, is the number 9. However, if you supply...

FILTER on top n values with criteria
This formula uses the FILTER function to retrieve data based on a logical test constructed with the LARGE and IF functions. The result is the top 3 scores in group B. The FILTER function applies criteria with the include argument. In this example,...
Related functions