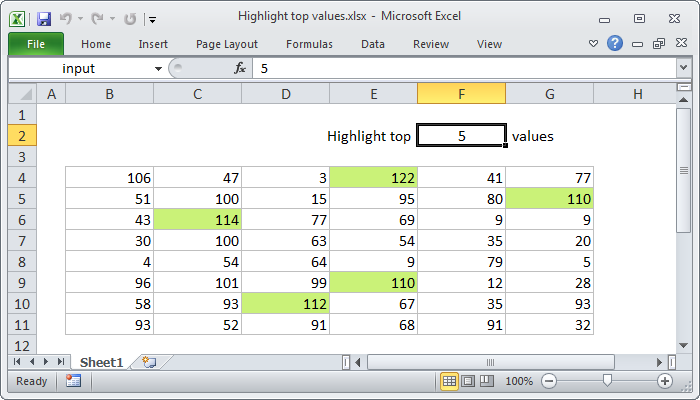 To highlight the highest values in a set of data with conditional formatting, you can use a formula based on the LARGE function.

In the example shown, the formula used for conditional formatting is:

This formula is based on the LARGE function, which returns the nth largest value from a range or array of values. The range appears as the first argument in LARGE, and the value for "n" appears as the second:

In the example, the input value (F2) is 5, so LARGE will return the 5th largest value in the data, which is 110. The formula then compares each value in the data range with 110, using the greater than or equal to operator:

Any cell with a value greater than or equal to 110 triggers the rule, and the conditional formatting is applied.

Highlight values greater than
Note: Excel contains built-in "presets" for highlighting values above / below / equal to certain values, but if you want more flexibility you can apply conditional formatting with your own formula as explained in this article. If you want to...
Related functions

I’ve actually been gorging on your articles and videos every night this week. Thank you so very much for making the site!! -Brenda