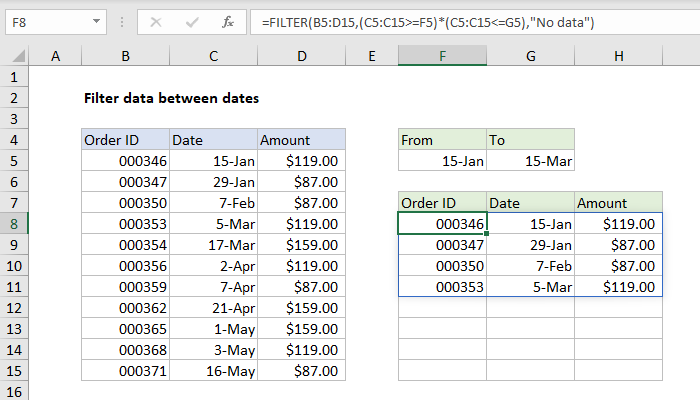 To filter data to include records between two dates, you can use the FILTER function with boolean logic. In the example shown, the formula in F8 is:

Which returns records with dates between January 15 and March 15, inclusive.

This formula relies on the FILTER function to retrieve data based on a logical test created with a boolean logic expression. The array argument is provided as B5:D15, which contains the full set of data without headers. The include argument is based on two logical comparisons:

After logical expressions are evaluated, we have:

Note there are eleven results in each set of parentheses, one for each date in the data. The multiplication operation coerces the TRUE FALSE values to 1s and 0s, so the final result is a single array like this:

Note the four 1s in the array correspond to the four dates that pass the test. This array is delivered to the FILTER function and used to filter the data. Only rows where the result is 1 make it into the final output.

The "if_empty" argument is set to "No data" in case no matching data is found.

Filter by date
This formula relies on the FILTER function to retrieve data based on a logical test created with the MONTH function . The array argument is provided as the named range "data", which contains the full set of data without headers. The include argument...

Thank you for all the work you do. The help you provide with your page is not only very helpful but very professional and outstanding. -Juan