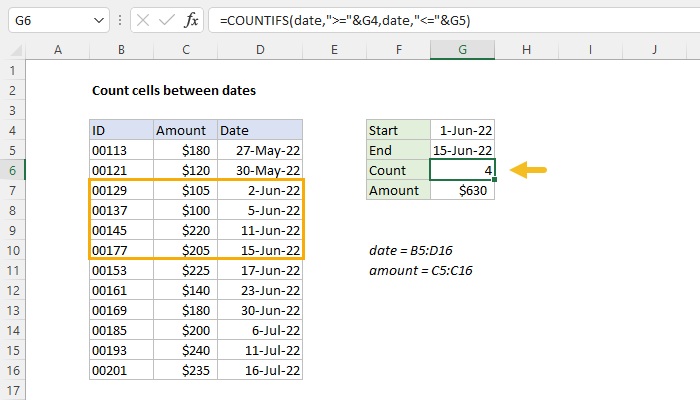 To count the number of cells that contain dates between two dates, you can use the COUNTIFS function. In the example shown, G6 contains this formula:

In this example, the goal is to count the number of cells in column D that contain dates that are between two variable dates in G4 and G5. This problem can be solved with the COUNTIFS function or the SUMPRODUCT function, as explained below. For convenience, the worksheet contains two named ranges: date (D5:D16) and amount (C5:C16). The named range amount is not used to count dates, but can be used to sum amounts between the same dates, as seen below.

Note that the logical operators ">=" and "<=" must be entered as text and surrounded by double quotes. This means we must use concatenation with the ampersand operator (&) to join the operators to the dates in cell G4 and cell G5. This syntax is specific to a group of eight functions in Excel.

This problem can also be solved with the SUMPRODUCT function which allows a cleaner syntax:

This is an example of using Boolean algebra in Excel. Because the named range date contains 12 dates, each expression inside SUMPRODUCT returns an array with 12 TRUE or FALSE values. When these two arrays are multiplied together, they return an array of 1s and 0s. After multiplication, we have:

SUMPRODUCT then returns the sum of the elements in the array, which is 4.

To sum the amounts on dates between G4 and G5 in this worksheet, you can use the SUMIFS function like this:

The conditions in SUMIFS are the same as in COUNTIFS, but SUMIFS also accepts the range to sum as the first argument. The result is $630.

To sum the amounts for dates between G4 and G5, you can use SUMPRODUCT like this:

Here again, the conditions are the same as the original SUMPRODUCT formula above, but we have extended the formula to multiply by amount. This formula simplifies to:

The zeros in the first array effectively cancel out the amounts for dates that don't meet criteria:

and SUMPRODUCT returns $630 as a final result.

Count between dates by age range
The goal of this example is to count rows in the data where the date joined falls between start and end dates (inclusive) and the age also falls into the age ranges seen in column G. The formula is complicated somewhat by the fact that the age range...

Highlight values between
When you use a formula to apply conditional formatting, the formula is evaluated for each cell in the range, relative to the active cell in the selection at the time the rule is created. So, in this case, if you apply the rule to B4:G11, with B4 as...

Highlight dates between
The AND function takes multiple arguments and returns TRUE only when all arguments return TRUE. The DATE function creates a proper Excel date with given year, month, and day values. Because the reference to B4 is fully relative, it will update as...

Summary count by month with COUNTIFS
In this example, we have a list of 100 issues in Columns B to D. Each issue has a date and priority. We are also using the named range "dates" for C5:C104 and "priorities" for D5:D105. Starting in column F, we have a summary table that shows a total...
Related functions