Sum if greater than 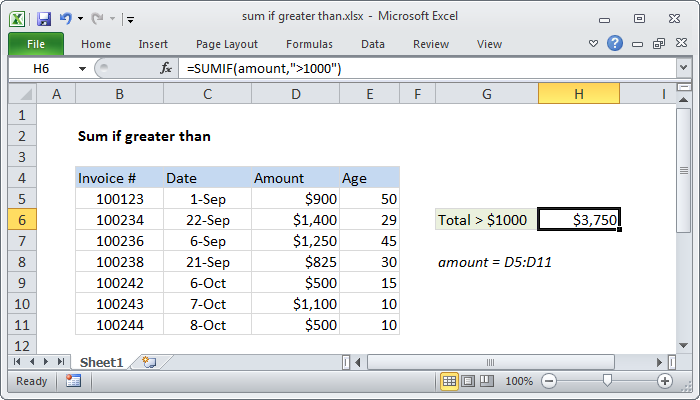 To sum if greater than, you can use the SUMIF function. In the example shown, cell H6 contains this formula:

This formula sums the amounts in column D when they are greater than 1000.

How the formula works

In this case, we want to match amounts greater than 1000, and the "criteria range" is the same as the "sum range" so there is no need to enter the sum range as a final argument.

The SUMIF function simply sums up all amounts greater than 1000.

Note that both the operator (>) and threshold amount are enclosed in double quotes ("").  If you want to include the threshold number in the sum, use greater than or equal to (>=), like so:

If you want to put the threshold amount on the worksheet so that it can be easily changed, use this formula:

Where A1 is a reference to a cell that contains the threshold number. This is an example of concatenation.

You can also use the SUMIFS function. SUMIFS can handle multiple criteria, but the order of the arguments is different from SUMIF. The equivalent SUMIFS formula is:

Notice that the sum range always comes first in the SUMIFS function. Also note that SUMIFS criteria need to be entered in pairs (range / criteria) which means the named range "amount" must be entered twice:  once as the sum range, and once as a criteria range.

Sum if less than
To sum if less than, you can use the SUMIF function. In the example shown, cell H5 contains this formula: = SUMIF ( amount , "<1000" ) Where "amount" is a named range for cells D5:D11. This formula sums the amounts in column D when they...

Sum if begins with
To sum cells if other cells begin with a specific value, you can use the SUMIF function . In the example shown, the formula in G6 is: = SUMIF ( C5:C11 , "t-shirt*" , D5:D11 ) This formula sums the amounts in column D when a value in column...

Sum if not blank
To sum cells when certain values are not blank, you can use the SUMIF function. In the example shown, cell G6 contains this formula: = SUMIF ( C5:C11 , "<>" , D5:D11 ) This formula sums the amounts in column D only when the value in...

Sum if cells are equal to
To sum numbers based on cells being equal to a certain value, you can use either the SUMIF or SUMIFS functions. In the example shown, we are summing all sales in the West region. The formula in cell H6 is: = SUMIF ( region , "West" ,...

Sum if equal to either x or y
To sum numbers based on other cells being equal to either one value or another (either x or y), you can use the SUMIF function. In the example show, we are summing all sales from either the West OR North region. The formula in cell H6 is: = SUMIF (...

SUMIFS is a function to sum cells that meet multiple criteria. SUMIFS can be used to sum values when adjacent cells meet criteria based on dates, numbers, and text. SUMIFS supports logical operators (>,...

This site is perfect for me as a moderate Excel user who sometimes needs a formula that I cannot figure out on my own. It's clean, easy to use, comprehensive and doesn't have distracting material like many other Excel help sites. -Susan