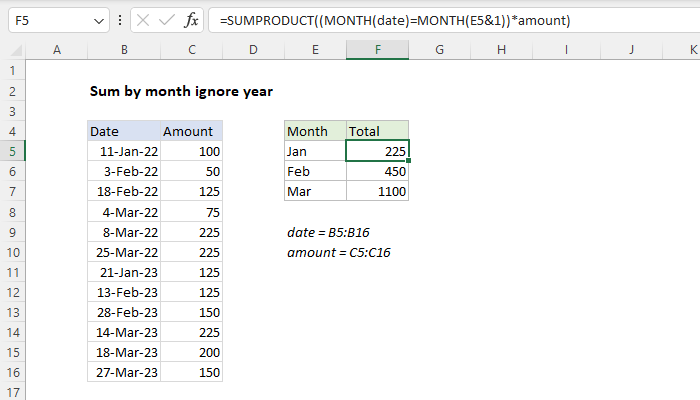 To sum data by month, ignoring year, you can use a formula based on the SUMPRODUCT and MONTH functions. In the example shown, the formula in H6 is:

The result is a total of all sales in March, ignoring year.

This data set contains over 2900 records, and the formula above uses two named ranges:

Inside the SUMPRODUCT function, the MONTH function is used to extract the month number for every date in the data set, and compare it with the number 3:

If we assume a small data set listing 3 dates each in January, February, and March (in that order), the result would be an array containing nine numbers like this:

where each number is the "month number" for a date. When the values are compared to 3, the result is an array like this:

This array is then multiplied by the amount values associated with each March date. If we assume all nine amounts are equal to 100, the operation looks like this:

Notice the math operation changes the TRUE FALSE values into ones and zeros. After multiplication, we have a single array in SUMPRODUCT:

Note the only surviving amounts are associated with March, the rest are zero.

Finally, SUMPRODUCT returns the sum of all items – 300 in the abbreviated example above, and 25,521 in the screenshot with actual data.

To get a count by month ignoring year, you can use SUMPRODUCT like this:

To calculate and average by month ignoring year, you combine the two SUMPRODUCT formulas above like this:

Sum by month
In this example, the goal is to sum the amounts shown in column C by month using the dates in column B. In this case, we are taking into the account the year as well, so the subtotals will be for January 2021, February 2021, etc. To perform this...

Summary count by month with COUNTIFS
In this example, we have a list of 100 issues in Columns B to D. Each issue has a date and priority. We are also using the named range "dates" for C5:C104 and "priorities" for D5:D105. Starting in column F, we have a summary table that shows a total...

Count birthdays by month
You would think you could use the COUNTIF function to count birthdays, but the trouble is COUNTIF only works with ranges , and won't let you use something like MONTH to extract just the month number from dates. So, we use the SUMPRODUCT function...

Average by month
The AVERAGEIFS function can average ranges based on multiple criteria. In this case, we configure AVERAGEIFS to average amounts by month using two criteria: (1) match dates greater than or equal to the first day of the month, (2) match dates less...
Related functions

How to build a simple summary table
Pivot Tables are fantastic tools for summarizing data, but you can also use formulas to build your own summaries using functions like COUNTIF and SUMIF. See how in this 3 minute video.