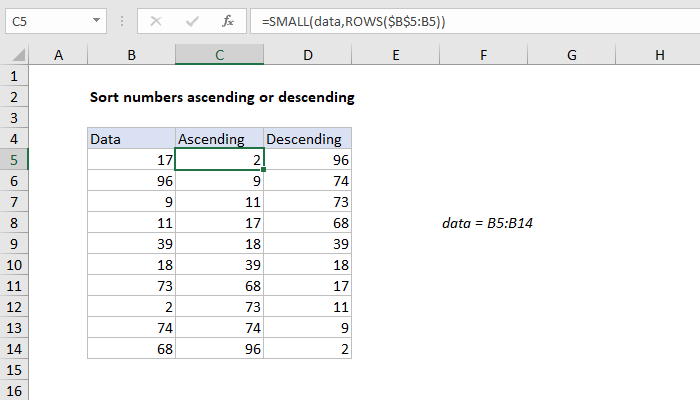 To dynamically sort a list of numbers in ascending order, you can a simple formula based on the SMALL function with an expanding range. In the example shown, the formula in cell C5 is:

In the example shown, "data" is the named range B5:B14. In this example, the main challenge is to increment a value for nth. This is done by using an expanding range inside the ROWS function:

As the formula is copied down the table, the range expands and the number or rows increases, with supplies an incrementing value.

To sort numbers in descending order, simply replace the SMALL function with the LARGE function:

Like SMALL, the LARGE function extracts an "nth" value. However, rather than the "nth smallest" LARGE returns the the "nth largest".

Basic numeric sort formula
To dynamically sort data that contains only numeric values, you can use a helper column and a formula created with the RANK and COUNTIF functions. In the example shown, the formula in D5 is: = RANK ( C5 , sales ) + COUNTIF ( $C$5:C5 , C5 ) - 1 where...

Basic text sort formula
To dynamically sort text values in alphabetical order, you can use use a formula based on the COUNTIF function. In the example shown, the formula in C5 is: = COUNTIF ( countries , "<=" & B5 ) where "countries" is the named range B4:...

Display sorted values with helper column
To retrieve and display values sorted with a helper column, you can use an INDEX and MATCH formula, with a little help from the ROWS function. In the example shown, the formula in F5 is: = INDEX ( sales , MATCH ( ROWS ( $D$5:$D5 ), sort , 0 )) which...

Random sort formula
To randomly sort existing values with a formula, you can use an INDEX and MATCH formula together with helper columns as shown in the screenshot. In the example shown, the formula in E5 is: = INDEX ( names , MATCH ( ROWS ( $D$5:$D5 ), sort , 0 ))...

Your website has helped me tremendously to understand how formula and functions works. I purchase books on excel and did not gain the understanding and knowledge that I did from your website. Thank you. -San