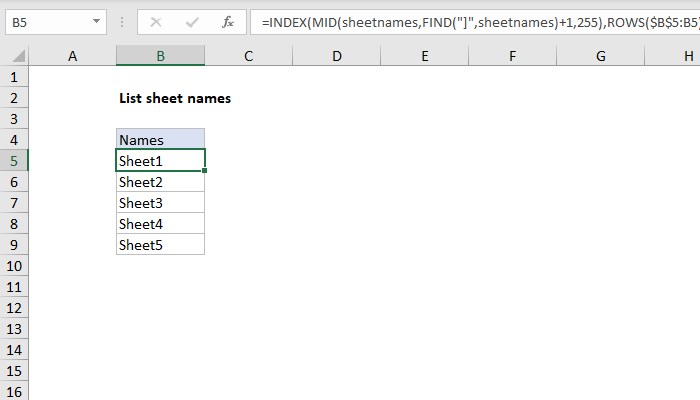 To list worksheets in an Excel workbook, you can use a 2-step approach: (1) define a named range called "sheetnames" with an old macro command and (2) use an INDEX formula to retrieve sheet names using the named range. In the example shown, the formula in B5 is:

Note: I ran into this formula on the MrExcel message board in a post by T. Valko.

The named range "sheetnames" is created with this code:

GET.WORKBOOK is a macro command that retrieves an array of sheet names in the current workbook. The resulting array looks like this:

A cryptic expression is concatenated to the result:

Back on the worksheet, cell B6 contains this formula copied down:

Working from the inside out, the MID function is used to remove the worksheet names. The resulting array looks like this:

This goes into the INDEX function as "array". The ROW function uses an an expanding ranges to generate an incrementing row number. At each new row, INDEX returns the next array value. When there are no more sheet names to output, the formula will return a #REF error.

Note: because this formula relies on a macro command, you'll need to save as a macro-enabled workbook if you want the formula to continue to update sheet names after the file is closed and re-opened. If you save as a normal worksheet, the sheetname code will be stripped.

Get sheet name only
To get the name of the current worksheet (i.e. current tab) you can use a formula based on the CELL function . CELL retrieves the workbook name and sheet, and the MID and FIND functions are used to extract just the sheet name. In the example shown,...
Related functions

The Excel NOW function returns the current date and time, updated continuously when a worksheet is changed or opened. The NOW function takes no arguments. You can format the value returned by NOW as a date, or as a date with time by applying a...

The Excel T function returns text when given a text value and an empty string ("") for numbers, dates, and the logical values TRUE and FALSE. The T function is provided for compatibility with other spreadsheet programs and is generally not...