Get domain name from URL 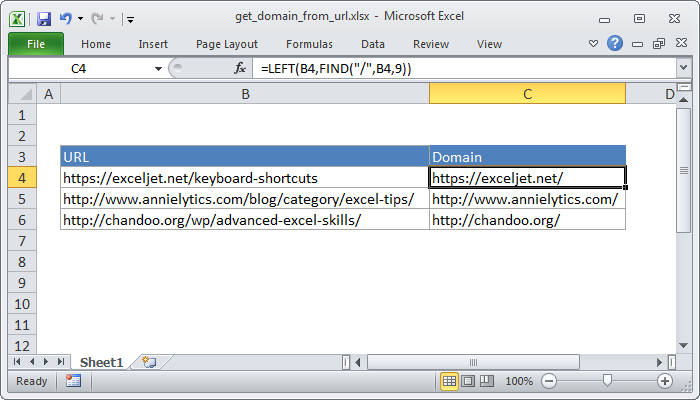 If you want to extract the domain name from a complete URL, you can do so with a formula that uses the the LEFT and FIND functions. In the generic form above, url is the the URL you are working with.

In the example, we are using this formula:

B4 contains the URL: "https://exceljet.net/keyboard-shortcuts"

At the core, this formula is extracting characters from the URL, starting from the left, and using the FIND function to figure out how many characters to extract.

First, FIND locates the "/" character in the URL, starting at the 9th character. This is the "clever" part of the formula. URLs begin with something called a "protocol" which looks like this:

and so on. By starting at the 9th character, the protocol is skipped, and the FIND function will return the location of the 3rd instance of "/" (the first instance after the double slash in the protocol).

In this case, the third instance of "/" is the 21st character in the URL, so FIND returns the number 21.

The LEFT function then extracts 21 characters from the URL, starting at the left. The result is the domain name with a trailing slash.

If you want to get the domain name without a trailing slash, just subtract the number 1 from the the result of FIND like so:

Love this website! It was so useful! Thank you! And your explanations are simple. -Monica